This tactical preview was originally published on our flagship tactical analysis site, totalfootballanalysis.com.

Another London derby on Saturday afternoon will find Arsenal and Chelsea in a battle of significant importance. The Gunners are in need of a win to close the six-point gap on Chelsea. On the other hand, the Blues are motivated to hold onto their fourth place in pursuit of a Champions League place.

Both teams have performed inconsistently lately with Arsenal struggling at the back and Chelsea having a hard time in the final third. Unai Emery’s side have picked up just four points from their past four games as a result of switching formations and quite a few defensive injuries. Despite achieving better results, their rivals have failed to deliver consistent performances too. But what’s changed since their last meeting and what could we expect of this clash?

Similar to last year Chelsea are in search of a solid striking force. The team desperately needs a new addition to the frontline as Olivier Giroud and Alvaro Morata have failed to meet expectations. Eden Hazard is still their main man, leading his team’s goalscoring charts with 10 goals this term, followed by Pedro (seven) and then Morata (five). Sarri’s side has had some struggles with their end product. 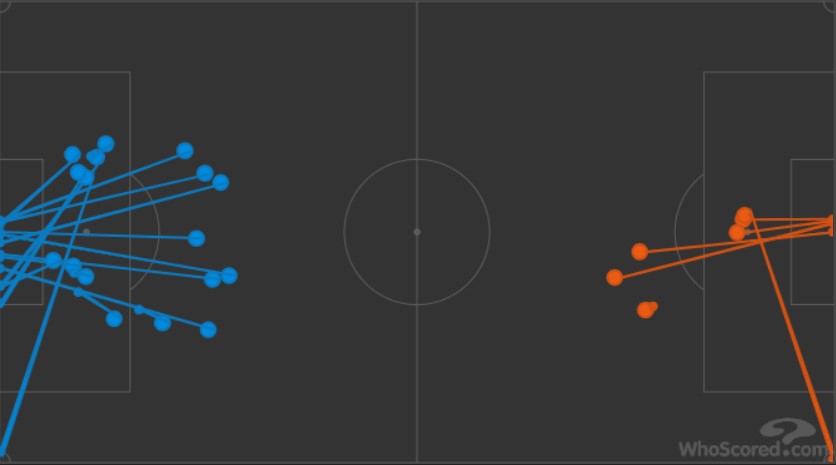 The most evident proof of that is their performance against Tottenham. The Blues produced 17 shots without scoring, compared to Spurs’ six that resulted in them winning 1-0. As you can see in the image above, half of their shots came from outside the box. This was a result of Tottenham’s well-structured defensive line and Chelsea’s failure to open spaces and use them.

It clearly won’t be long till Hazard’s complexity won’t be enough and the team will subsequently lose some points. They are linked with the 31-year-old Gonzalo Higuain, who might be able to help them as it might be his last opportunity to prove himself. It is doubtful that Arsenal’s sloppy defence will keep a clean sheet, but this is going to be one of those games to show if Sarri has a plan B.

When it comes to the Gunners there is no need to panic over their attacking force. It is expected that Unai Emery will stick to the 3-4-3 (3-4-2-1) formation and use Lacazette in the centre of the attack, Aubameyang on the left and Iwobi on the right. Although this might not be their most common positioning it will cause problems for the opposition defenders. With a combined 21 goals, Aubameyang (14) and Lacazette (seven) seem to enjoy playing alongside each other. 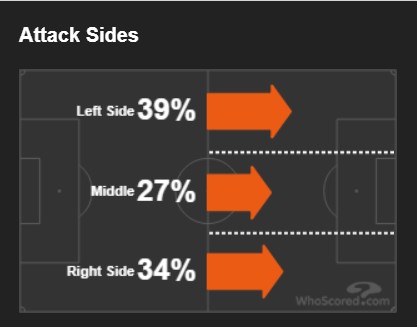 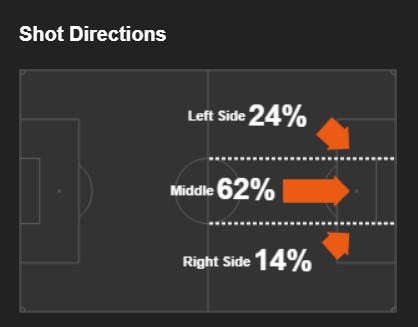 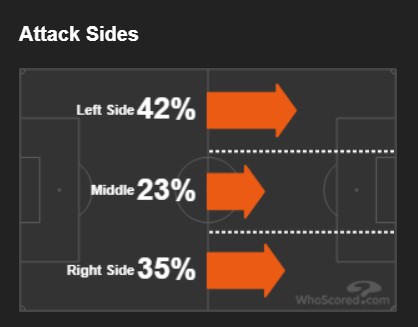 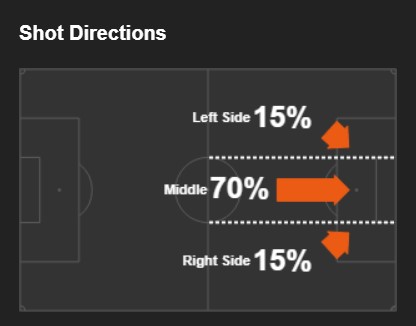 From the pictures above you can see that both Chelsea (above) and Arsenal(below) attack mostly on the left. However, when it comes to shot direction they always try to either cut inside or provide a cross to the middle where most of their shots come from.

This might be problematic for Arsenal if Unai Emery goes with a three-man defence, as the team fails to find the balance during defensive transitions. This would allow the Blues to spread out wide and then use the half-spaces as channels to provide balls into the middle.

Both teams are known for trying to keep possession for longer periods of time using a combination of short passes in the midfield area. There is a slight difference in other areas though, as you can see from the images below. 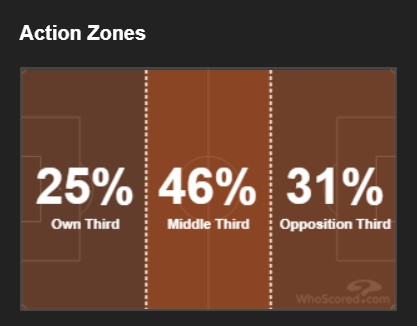 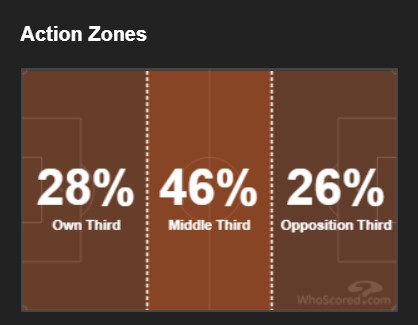 Chelsea’s players (left) use these combinations to keep the ball between the middle and the opposition third, so whenever there is a newly opened space they can react quickly and create an opportunity. Meanwhile, Arsenal’s players often keep possession in the spaces between their own third and the middle as they try to build up from the back and attack at speed.

The main question here is who is going to win the midfield battle. Their main men Jorginho and Torreira, both new to the Premier League, have made an impressive start to the campaign. More often than not though, they both fail to deliver that edgy, confident performance.

When it comes to owning the central area, the advantage once again goes to the Blues. Simply put, Kante’s performances are more consistent and he can handle the situation, whereas Granit Xhaka fails to show strong decision-making when his partner is not playing on his potential. 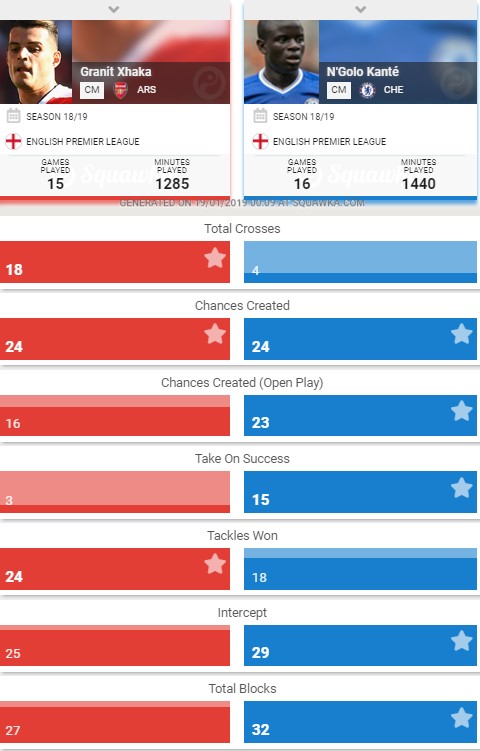 When it comes to delivering to the front lines Xhaka is in front with his 18 crosses, compared to only four by Kante. They have both created 24 chances so far, although almost all of the Frenchman’s are from open play.

When it comes to their defensive contribution things look a bit different. Kante’s ball control has led to 15 take-on successes, while the Swiss international has managed only three. He performs better under pressure too as he has made more interceptions and blocks than Xhaka. The vice-versa in the tackles section is mostly a result of their different styles of play, as it is known that the Swiss player is more aggressive.

Their performances will be crucial in the derby as Xhaka’s lack of strong decision-making might play a huge part of the team’s defensive actions. If Chelsea manage to take advantage of these opportunities they will succeed.

What plan Bs could thе managers have?

Unai Emery should have a plan B, otherwise he risks looking unprepared. It would be better for him if this back-up plan is called Mesut Ozil. The manager occasionally drops the German from the squad for ‘tactical’ reasons. At first, it wasn’t that big of a deal, but when Iwobi and Ramsey sometimes clearly lack a connection you start wondering if the team really doesn’t need Ozil.

If Emery switches to 4-1-2-1-2 for example, the playmaker might be the one to pick up the ball from his fellow midfielders and give Xhaka an opportunity to chase his defensive responsibilities more strictly.

Meanwhile, Callum Hudson-Odoi has a chance to become the late hero for his team. If Sarri plays him later in the game against the tired opposition’s back line, he might use his pace and form some counter-attacks which we already know are a nightmare for the Arsenal.

These teams meet in the middle of transitional seasons, as they try to pay more attention to tactics and positional play. They are both in the fight for a Champions League place and need the three points desperately. It will be a game of tactical chess, but it could just as easily come down to an individual mistake to tip the scales. One thing is sure, it is going to be an interesting look at what both managers have done in their first months in the Premier League.

If you love tactical analysis, then you’ll love the digital magazines from totalfootballanalysis.com– a guaranteed 100+ pages of pure tactical analysis covering topics from the Premier League, Serie A, La Liga, Bundesliga and many, many more. Buy your copy of the January issue for just ₤4.99 here, or even better sign up for a ₤50 annual membership (12 monthly issues plus the annual review) right here.

It’s early days, but how has Higuain fared at Chelsea thus far?

The Regista options available to Sarri

The battle of wingers: The performance that raised the bar for Chelsea youngsters

Players from Chelsea who will be crucial for their nations at...

How Does Chelsea Target Sergej Milinkovic-Savic Compare To Chelsea’s Other Midfielders?

Lebouf give his two cents regarding Chelsea’s quest for Coutinho

The 5 Most Popular Sports To Bet On In The World