Both teams came into this game looking to win. The visitors needed to keep up their winning streak due to the fact that Liverpool were in shooting range. On the other hand, Chelsea tried to recover from the recent defeat against the Wolves.

Probably the main question before the match was how Sarri and Pep Guardiola would approach this battle, as both sides are heavily ball-oriented with a possession-based style of play. In this analysis, I will reveal how Chelsea played. 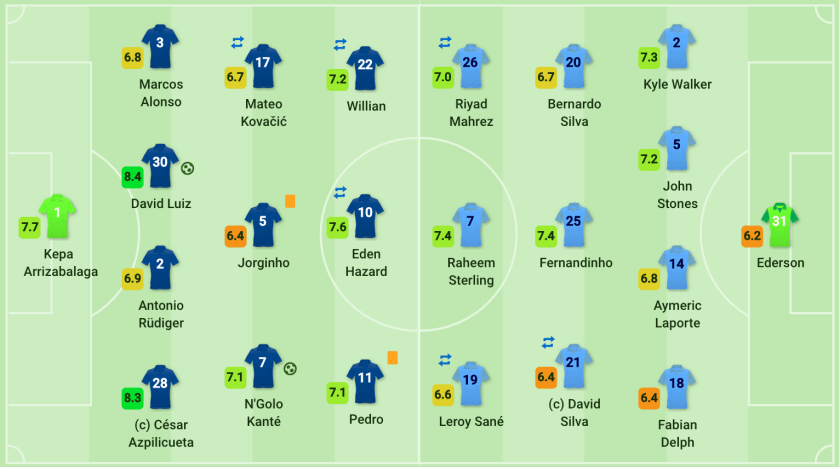 In the absence of Agüero, Sterling took his position instead of Gabriel Jesus. On the left, Leroy Sane featured while on the right, Riyad Mahrez played.

Also, the home side continued to operate with the best possible line-up. However, there was a special spin on it. Both of Giroud and Morata got a place on the bench and Hazard took the centre-forward position, between Willian and Pedro. Sarri’s plan was to gain even more flexibility as Hazard is more malleable and agile than Giroud, for example. More importantly, this was a perfect setup for dangerous counter-attacking play.

The result probably suggests that it was an easy victory in which Chelsea dominated. However, it was not really the case. The Citizens were more dominant as Chelsea focused on neutralising the opponent’s threat and relying on quick counter-attacks. Meanwhile, Pep Guardiola’s men struggled to create scoring chances in spite of the dangerous opportunities that they had. Interestingly, the goals came out of blue.

As always Chelsea started with their 4-3-3 formation, although in order to create a massive midfield block, the system was more of a 4-5-1 in out of possession. Pedro and Willian strictly dropped into midfield, while Hazard was tasked with keeping Fernandinho in his cover shadow. Sarri wanted to avoid being exposed or vulnerable, thus the 4-5-1 system aimed to prevent the visitors from passing to their forward players. 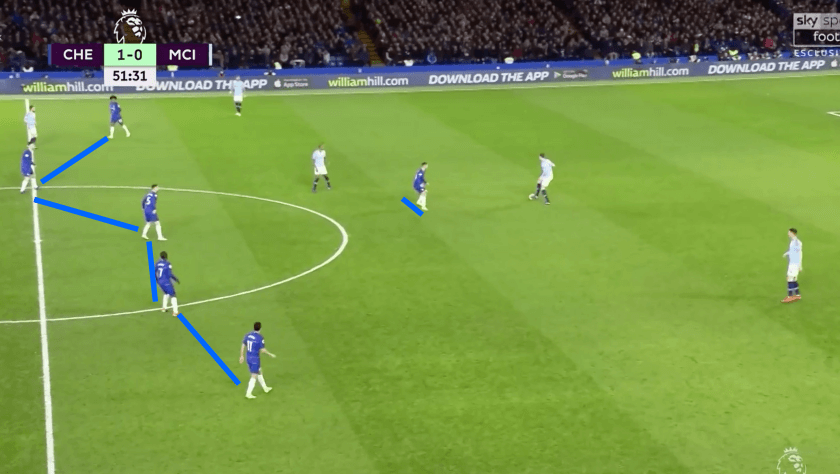 Jorginho often occupied a position close to Fernandinho in order to mark him in case Hazard could not prevent passes to him. Moreover, the two #8s also had interesting duties. Kante and Kovacic were positioned next to Jorginho, and therefore often had to cover David Silva and Bernardo Silva due to the fact that they maintained a position in the half-spaces.

Furthermore, as usual, we could see one of the trademarks of Sarri’s system. When Kante and Kovacic move out to press, Jorginho and the two wingers sit deeper. Their vertical pressing runs were triggered when the opposition centre-backs tried to drive forward on the ball. After a backwards pass lead to them passing between each other, this also initiated the press of Kante or Kovacic.

From time to time, Chelsea moved higher to press the opponent in their deep build-up. In these situations, Hazard and two others (sometimes Kante and Kovacic, sometimes Willian and Pedro) occupied a narrow position in order to protect the centre. In these situations, they were able to force their opponents wide.

Once it occurred, the ball-sided winger pressed the respective fullback diagonally, while the near-side #8 shifted to the wing to cover the short option (Bernardo Silva). Jorginho also moves wide to cover the space and mark Bernardo Silva. Hazard tended to block the pass to Fernandinho. Nevertheless, the pass route between the centre-backs was still open, therefore the visitors were able to escape the press through a switch to the far centre-back.

Finding space on the wings

We know that Chelsea’s massive block was created in order to stop City and reduce the threat which was an effective set-up. Consequently, the visitors struggled to find a break through the opponent’s structure. They were limited to only two options for chance creation. Firstly, they could rely on counter-pressing situations where they could steal the ball. Then follow-up counter-attack was an effective tool, since it created probably the biggest chances for City.

Secondly, due to Chelsea’s narrow structure, it was natural that the guests found spaces on the wings. However, if they just passed directly to the wing Chelsea were able to easily close them down with a move out to the ball side.

Interesting patterns arose during the match. Once the guests were able to switch play from one side to the other they could take advantage of the momentum of a shifting defence. Thus it allowed for Bernardo Silva to lose the attention of Kovacic.

However, due to the body position of Silva and his field of view he needed to turn around which obviously takes time. Consequently, he lost his momentum advantage and Chelsea’s defence was able to get in position and close down on him. 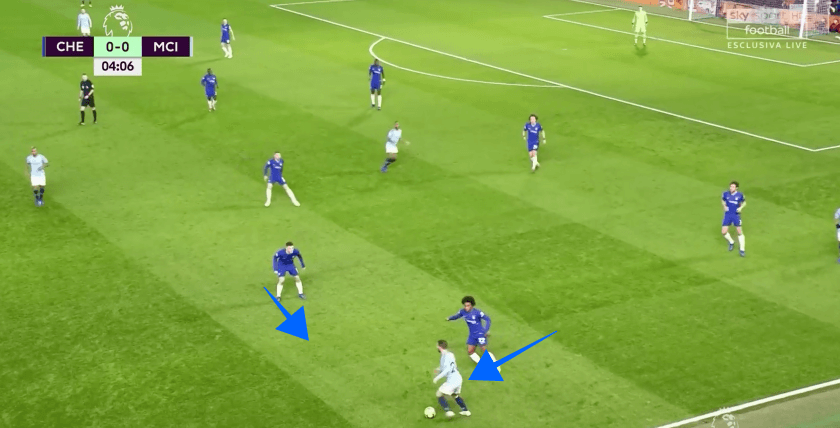 Look at the goals

Pedro receives a pass in a higher position next to the sideline for the first time in this match, then he cleverly switches to the other side where Willian is arriving. The latter’s ball control is not perfect thus it seems that the opportunity is over. However, he finds Kante with a perfect pass. This is how Chelsea took the lead at the very end of the first half, despite the fact that City seemed likely to score goals in that half. 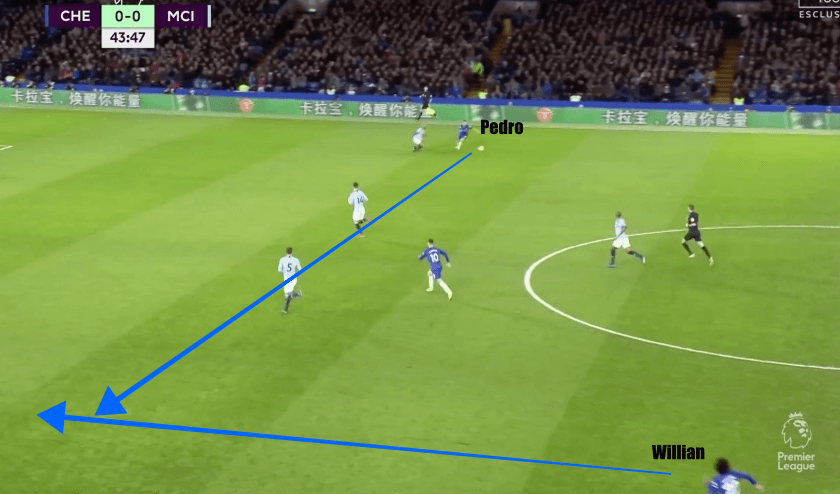 The second goal came from a corner after 78 minutes. David Luiz scored with a header but it is interesting how he was positioned before the corner. As you may see below, he was not even in the box as a starting position, therefore, he could avoid being marked. Then he slowly started to approach the far post alongside Rüdiger. 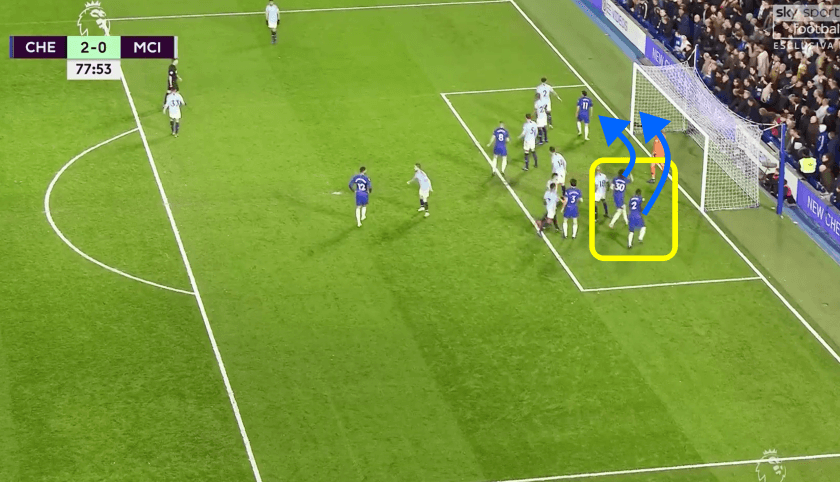 Both of them tried to bypass the defensive block by running outside it. they curved their run in front of the goalkeeper and then entered the block. They arrived in time for the header and managed to do so unmarked. 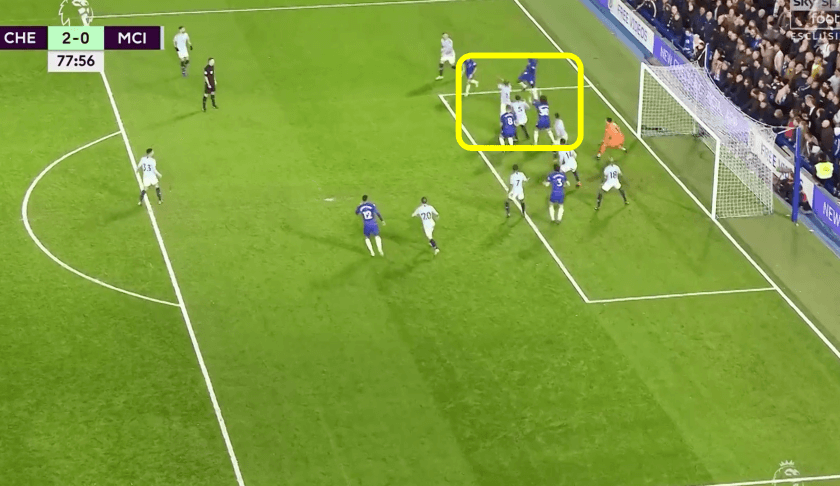 Struggles in attack and second half improvement

City were pretty good at preventing the home side from counter-attacking through the effective pressing scheme. In the situation below, a common pattern can be seen where Kovacic moves out wide in order to get out of the opponent’s cover shadow. However, as you may see, it was quickly cut off due to City blocking the way and there was no follow-up movement. 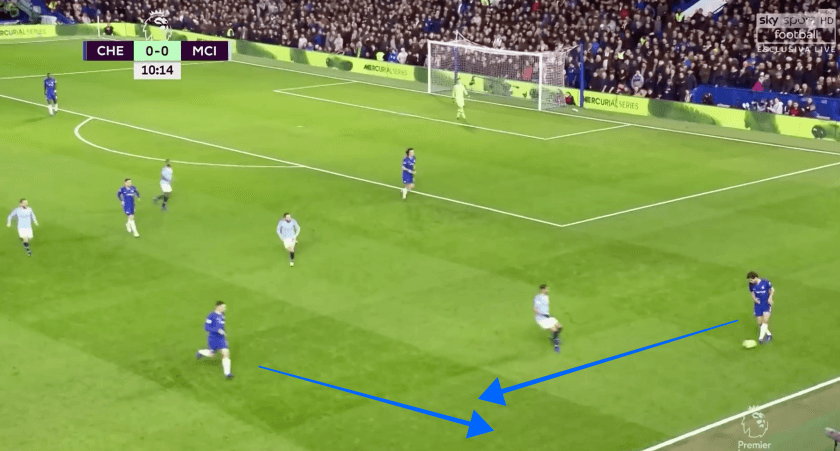 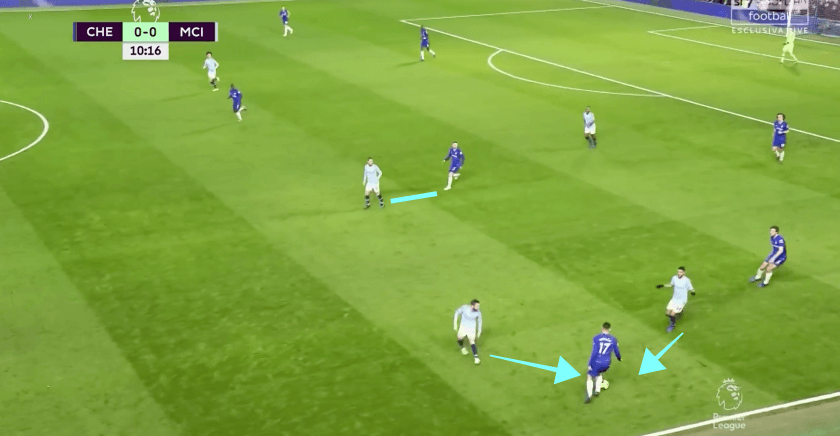 Another pattern in their game also takes place on the wings. As you see in the passmap Chelsea’s focus was on the right side as Hazard also tends to drop there more frequently.

Despite the intention of overloading the wing and advancing through combinations out wide, City players also moved to that zone and were thus able to eliminate these attempts. 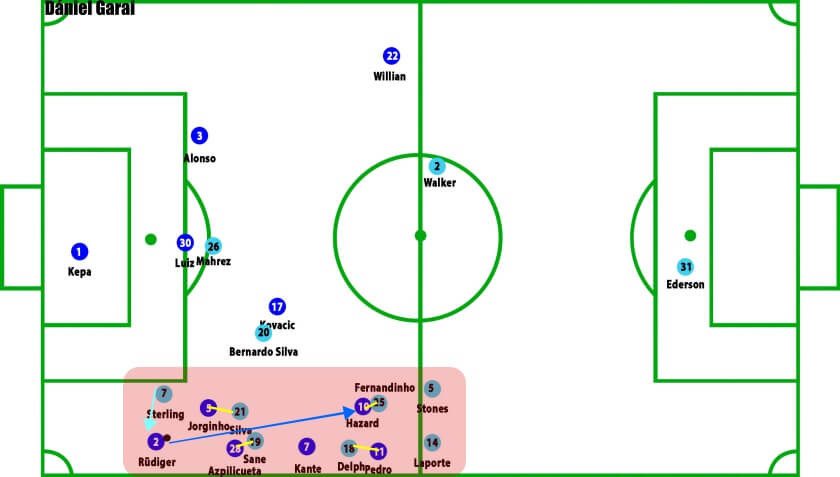 However, in the second half, it became more viable because of some changes in Chelsea’s setup and due to the fact that the intensity and tempo of the game started to drop.

Compare the situation above to the first half: now Chelsea did not move out wide that much, especially Hazard and Pedro. Kante took the role to move close to the sideline and offer a short vertical option, while Pedro approached from the half-space to receive a pass then bypassed the press through combinations with Kante.

In the second 45 minutes, Chelsea were more capable of reaching the opponent’s final third due to a slight adjustment and the more space they had.

The match was not a classic in terms of scoring chances or excitement in the final thirds, but that was due to both sides trying to eliminate the opposition strengths. Chelsea still managed to win because of their effectiveness in front of goal. Look at the xGs; we see the home side had 1.13 which means they overperformed in front of goal.

Meanwhile, Manchester City had only 0.69 which is definitely due to Chelsea’s defensive structure that reduced the Citizens’ threat. On average they achieve 2.18 expected goals per match. Thus they were not able to perform at a higher level, and Chelsea bettered Pep Guardiola’s men with a clever adaptation in their game and impressive finishing.

In the future, it is really interesting how Sarri and Chelsea will develop. Will it continue in the spring? This victory over Manchester City is a very important three points which can be more valuable in the future.

If you love tactical analysis, then you’ll love the digital magazines from totalfootballanalysis.com – a guaranteed 100+ pages of pure tactical analysis covering topics from the Premier League, Serie A, La Liga, Bundesliga and many, many more. Get your copy of November’s issue for just £4.99 here or preorder the first of TWO December issues right here.

Midfielder that was promised: Chelsea star going from villain to hero

What we tactically learned from the Community Shield loss