In their FA Cup fourth round battle, Chelsea came out on top against Sheffield Wednesday with a 3-0 victory. Obviously, the result was expected, but the first half did not seem an easy one due to the guests’ defensive manner which made Chelsea’s job difficult. Therefore, this tactical analysis will reveal the difficulties that Chelsea had to face.

Sheffield Wednesday continue to struggle in the Championship, although they were able to win their last match against Wigan. They had also managed to remain in the FA Cup, although the previous round was not a hard one.

On the other side, Sarri’s men had begun to get back on the right track with a win in the EFL Cup against Tottenham after the defeat against Arsenal. Several changes occurred in their line-up for this game, with Sarri throwing in new signing Gonzalo Higuain so that Eden Hazard could rest a bit.

Willian remained on the left wing while Hudson-Odoi replaced Pedro on the right. Ethan Ampadu, Andreas Christensen and Willy Caballero were handed rare starts. Ross Barkley also got an opportunity to play. Kovacic moved to the right side, occupying Kante’s position, while Barkley took the left half-space.

As underdogs, Wednesday took a defensive approach against Chelsea with a 4-1-4-1 or 4-5-1 formation. Consequently, their main and only tool for scoring was the counter-attack, although this proved extremely difficult. Since Fletcher did not stay high due to his defensive duties man-marking Ampadu, his positioning was based on the Welsh international’s movement. The almost complete lack of attacking threat appeared in the statistics with an xG of just 0.03.

With the 4-5-1 formation, the away team created a massive and compact shape designed to not allow Chelsea to utilise the central area. Thus Chelsea were restricted to the lateral zones. Sarri’s men aimed to create combinations down the wings – especially on the right – in between the ball-sided winger and full-back and the nearby number eight.

On the left, Chelsea exercised long balls towards Willian whose goal was to cut inside whilst Hudson-Odoi sought crossing opportunities from the right wing. Another pattern in Chelsea’s positional play was the positional rotation in between the winger, full-back and the nearby central midfielder. As the image below shows, when Kovacic or Barkley dropped deep the wingers would move into a narrower position, which give space for the full-backs to move forward and occupy higher areas. 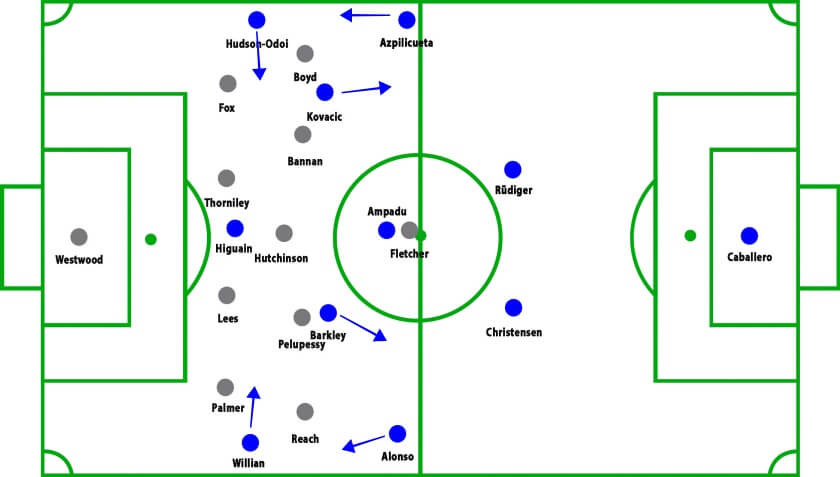 So, the big question was how would Chelsea deal with Wednesday’s defence? The answer was not very well; at least not at first. In the first 20-25 minutes, Chelsea clearly struggled to find a way to Wednesday’s goal. In this period of the game, their circulation often became schematic as the guests closed down central area and also the wing.

When they tried to progress in the middle and pass towards Higuain the opposition immediately cut off the attempts. Thus Higuain did not have a major role in this match, and there was no difference between how he or Girous played.

However, in the last few minutes of the first half Chelsea started to use their centre-backs more proactively. Before they just sought passing options to move the ball forward, but as time went by they became more active and courageous on the ball. With centre-backs driving forward on the ball Chelsea were able to manipulate the opponents and force them deeper.

Although Chelsea had a difficult task to break down the opponent’s defence, there were solutions that Chelsea’s play had in generally. However, they failed to take advantage of them. Sometimes they were not aware of the possible solution and there were occasions where bad decisions ruined the opportunity. Now, we will look at some of them.

First of all, here is a rare instance where Chelsea did everything right, and only through their mistake were Wednesday able to stop the attack. Kocavic moves forward to occupy the left centre-back while Higuain moves wider to attract the left full-back. Thus Chelsea created an advantageous situation against the opposition full-back, but more importantly they were able to push their opponents out of their comfort zone. This led to a hasty action which was a rash tackle.

Secondly, here is an occasion where Chelsea could have exploited the space behind the opposition full-back but were not aware of the opportunity.

Lastly, wrong decision making. Again, Chelsea pull out the opponent’s full-back which creates space. Barkley is about to fill that space but Willian decides to drive forward on the ball instead of feeding Barkley’s run.

Sheffield Wednesday’s game plan was to not allow the opponent to score while they tried to take the lead through counter-attacking. It almost worked out, but one mistake in the first half ruined everything. After then the situation for Wednesday became very difficult because now they had to score.

This obviously played into Chelsea’s hands, since it provided more space and opportunity for the home side. This was the end of the road for the Sheffield side but perhaps this will give them an opportunity to focus on the Championship. Meanwhile, Chelsea are still standing in four different competitions.

If you love tactical analysis, then you’ll love the digital magazines from totalfootballanalysis.com – a guaranteed 100+ pages of pure tactical analysis covering topics from the Premier League, Serie A, La Liga, Bundesliga and many, many more. Buy your copy of the January issue for just ₤4.99 here, or even better sign up for a ₤50 annual membership (12 monthly issues plus the annual review) right here.

Top 5 Chelsea Defenders of All Time