The Premier League had an interesting match day at the weekend since, besides Manchester City’s unexpected loss, Chelsea also got defeated by Claude Puel’s Leicester City. In this tactical analysis, we will look at how they were able to beat Chelsea.

Both sides operated with a 4-3-3 formation, however, the guests played in a more defensive style, thus in defending it was a 4-5-1/5-4-1 system. Of course, with this manner, they emphasised on counter-attacks which succeeded in the end, since they scored from a counter-attack and kept a clean sheet, which is a rare thing at Stamford Bridge. Only one time in this season, Chelsea were not able to score in their home ground. Everton also used a 5-4-1 structure in defence when they journeyed to West London. 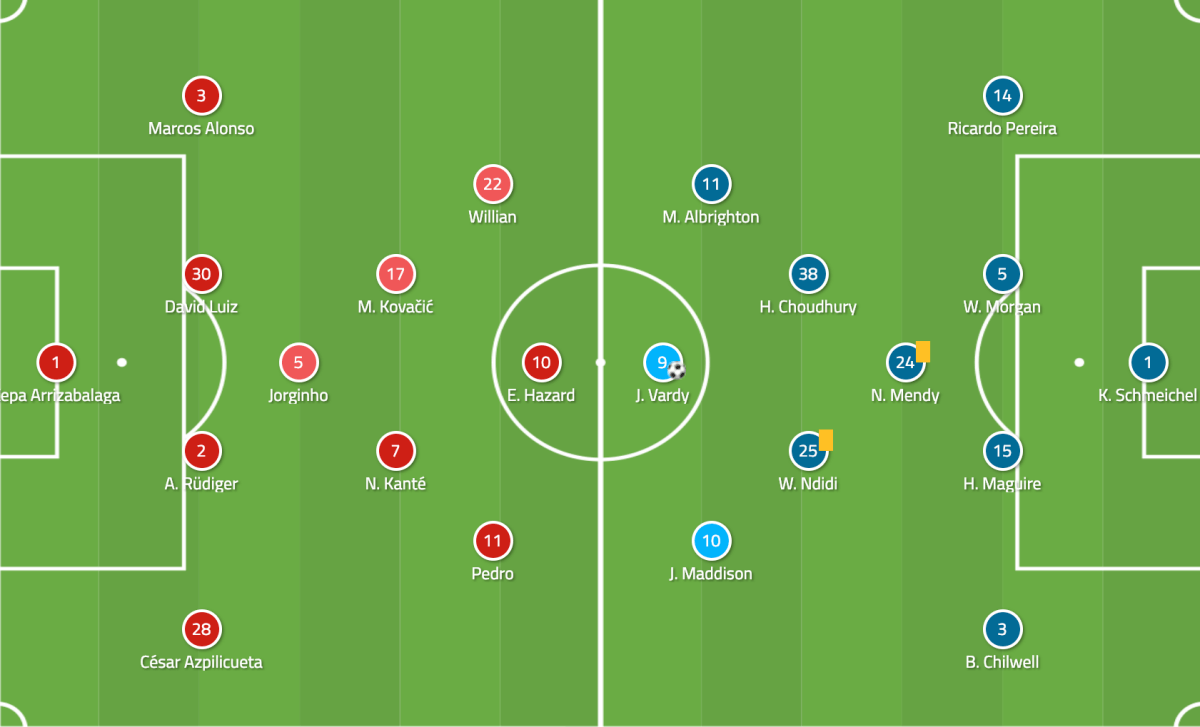 Leicester’s plan focussed on a strong presence in the middle which could deny the progress through there. Both wingers positioned around the middle while the centre-midfielders also stayed in a narrow shape.

Why was this so important for Leicester?

Sarri took some changes in the recent matches which left all the strikers on the bench and lined up with Hazard as a false 9 between the two wingers, Willian and Pedro. With these changes, Sarri gained a better connection between the players and even more flexibility. For example, one of the most important patterns was based on Hazard’s movement.

In the build-up phase, instead of staying deeper in order to help the build-up, Kante and Kovacic push forward occupying opponents in the second line. Usually, they open up a gap in the middle with stretching the oppositional second line. This where Hazard is trying to benefit with drops into the open space to receive the ball.

With this method, Chelsea was really effective against Brighton. However, Puel tried to avoid this issue with extra protection in the middle. 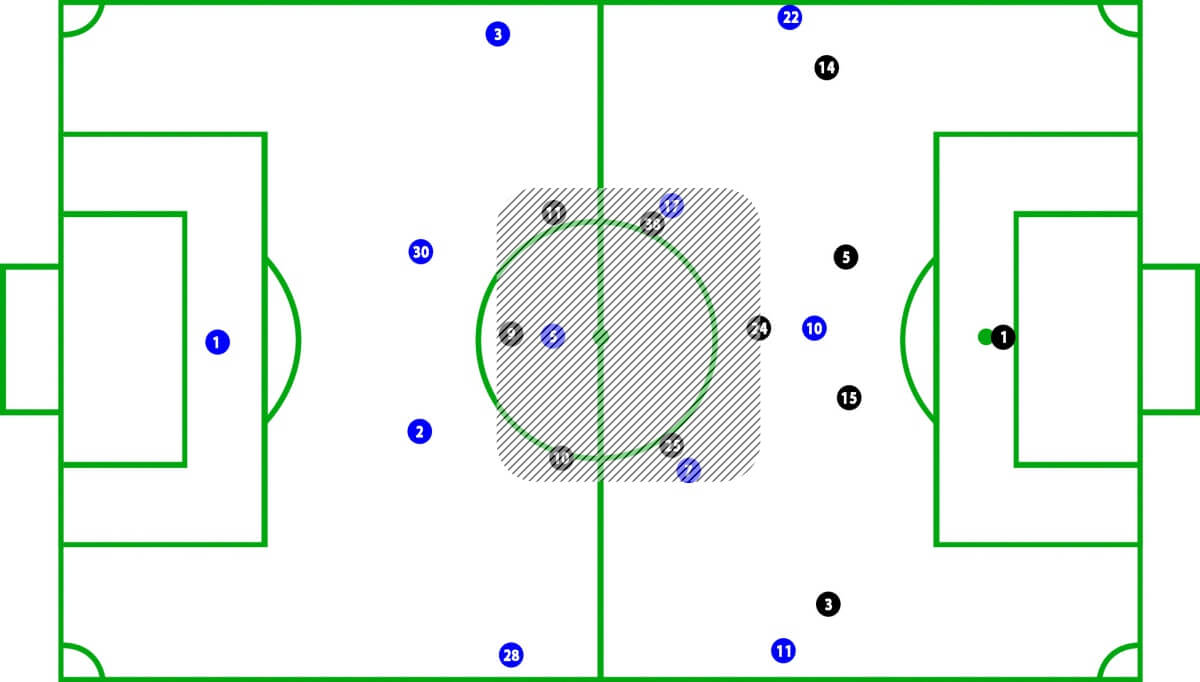 Vardy’s defensive duties started with covering Jorginho, besides pressing the centre-backs. Whilst Kante and Kovacic got tightly marked by Ndidi and Choudhury. Thus the wingers – Maddison and Albrighton – provided additional protection to the centre with mostly blocking the passing route towards this area.

This was quite effective, so Chelsea struggled to find ways into Leicester massive defensive shape. Also, they could not use the pattern that we elaborated earlier. Nevertheless, it can be a possible solution if Alonso and Azpilicueta would position in higher areas, while Willian and Pedro move infield. This can drag the Leicester’s wingers away from the centre since Willian and Pedro’s free position provides an additional threat. Thus, it could open up space in the middle. 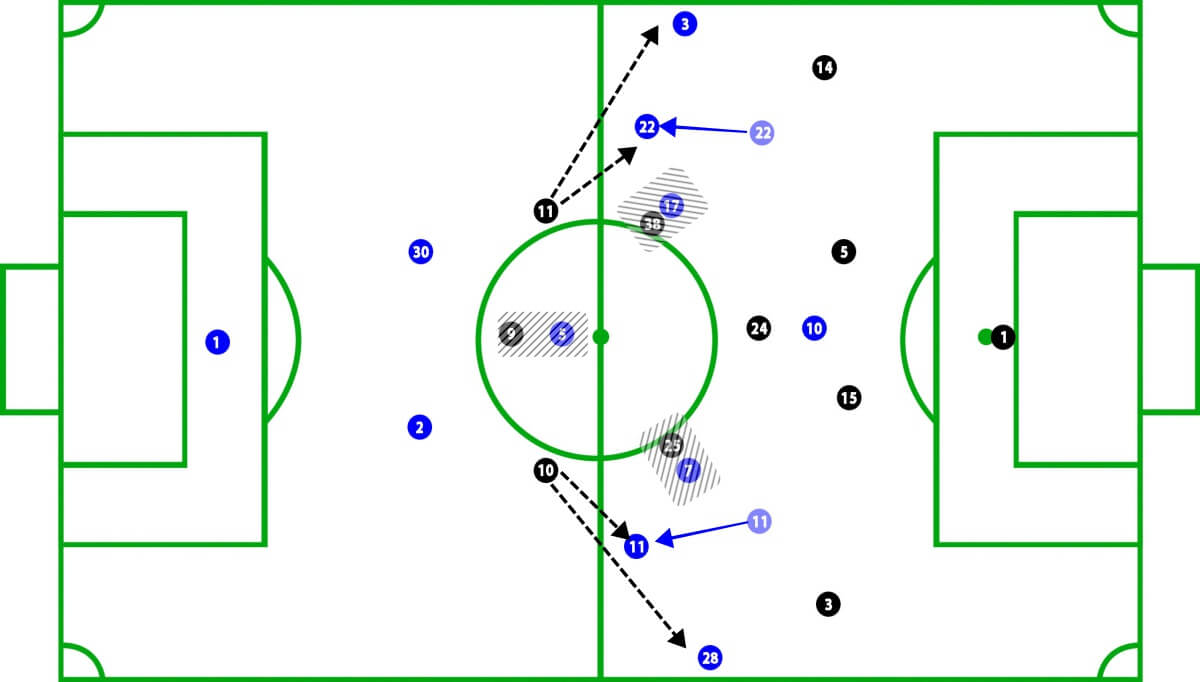 When Leicester moved into their deep defensive structure, the formation fluctuated between 4-5-1 and 5-4-1. The guests formed a massive block where all the lines stayed close to each other. Even Vardy dropped very deep in order to pressure the ball carrier.

Obviously, Chelsea struggled to break this low defensive block. They were not able to utilise the players inside the block like Kante or Kovacic, thus, they often had to drop deeper to meet the ball. The only time when Chelsea were able to reach Hazard with a pass – while he was inside the block – was due to an individual error, that allowed Hazard to receive the ball. This situation ended up with a dangerous shot that slightly hit the crossbar. Also, this was probably the biggest chance for Chelsea in the first half.

Leicester’s defensive structure reduced the speed and threat of Chelsea’s play. They became a bit rigid, especially compared to the usual style of them.

Overloads did not help – this time

Usually, one of the tools for breaking through a low 5-4-1/4-5-1 formation is to create overloads. This was another pattern that Chelsea tried to utilise in wings. However, Leicester’s defensive manner aimed to deny this attempt with shifting to the ball sidewards, therefore, frequently creating a numerically equal situation. 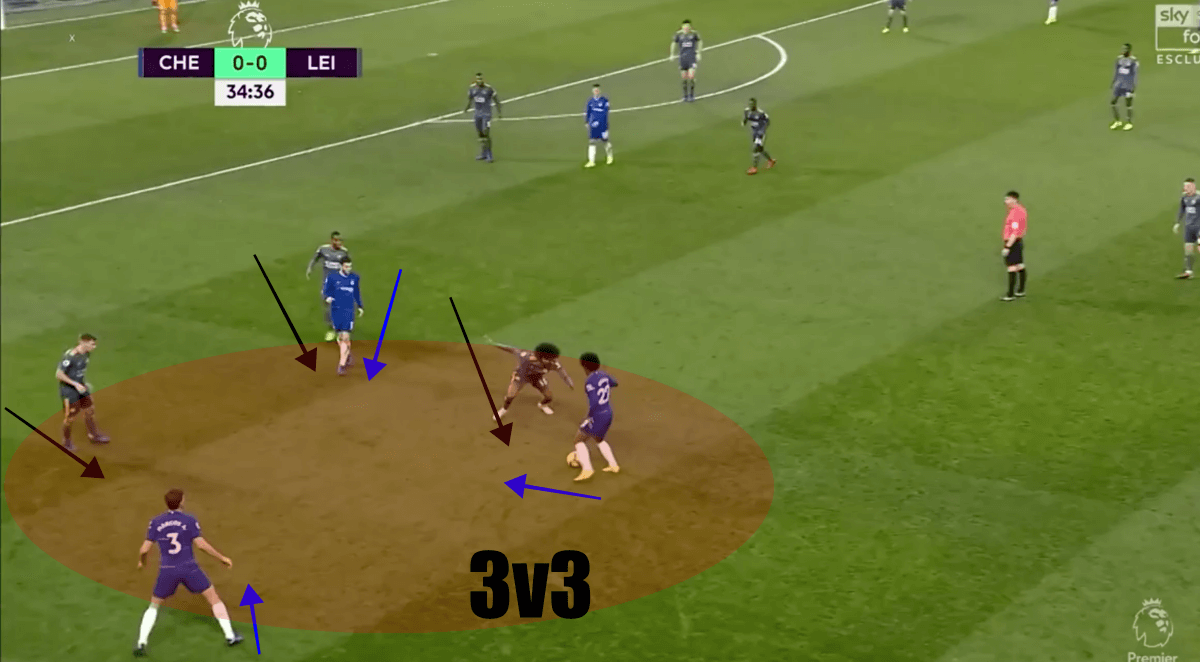 One of the issues with Chelsea’s wing-play was the bad positioning in the wings. At the beginning of the match, the full-backs stayed deeper in order to help the circulation phase. However, by the time went on, Leicester moved a bit deeper, thus Chelsea were able to create stable ball circulation in opponent’s half, therefore, Alsonso and Azpilicueta moved a bit higher.

Since both wingers and full-backs often occupied the same vertical zone, there were not adequate passing options when the ball moved out to wide areas. The full-backs had to choose between passing to the winger or a backwards pass to the centre-back.

There was a pattern which could be a good weapon. When the full-back was on the ball, the ball-near winger often dropped towards the ball which dragged the oppositional full-back out of position. As usual, in these kinds of situation, the two eights targeted the space behind the oppositional full-back with a diagonal run, especially Kante. However, this time, it was not utilised due to the bad timing. Kante’s runs, of course, take time but it was too much since Azpilicueta and Pedro were immediately under huge pressure. 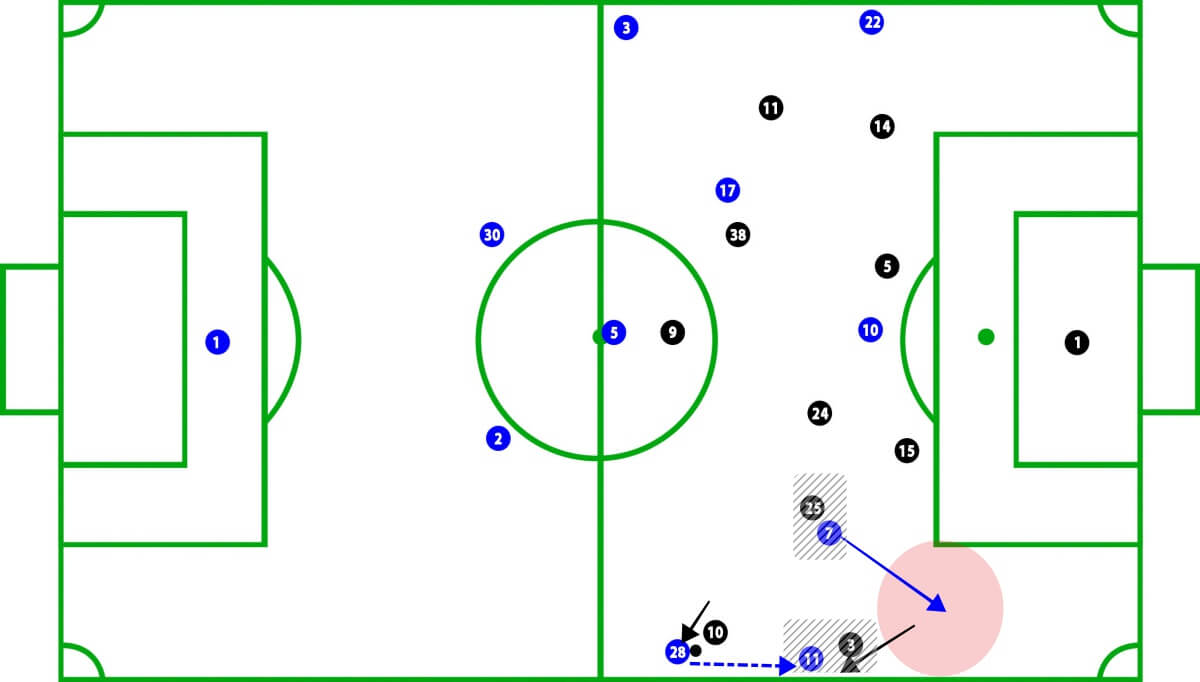 The one occasion when Chelsea tried to take advantage of it occurred in the left side when Kovacic received a pass in the space. Unfortunately, Kovacic drifted way too much into a wide area. So when he received the ball, he was in a trap due to Leicester’s defenders that tracked that run, meaning Kovacic couldn’t turn in to goal.

The best scenario for Leicester City

So, the second half started in the same manner. However, the visitors took the lead kind of out of blue with a counter-attack. After a won ball, Jorginho and Kovacic failed to tackle the ball carrier. They lacked the appropriate aggression in this situation.

Maddison received the ball, then passed towards Vardy who was not being tracked by Azpilicueta, therefore, he had enough space and time to score. 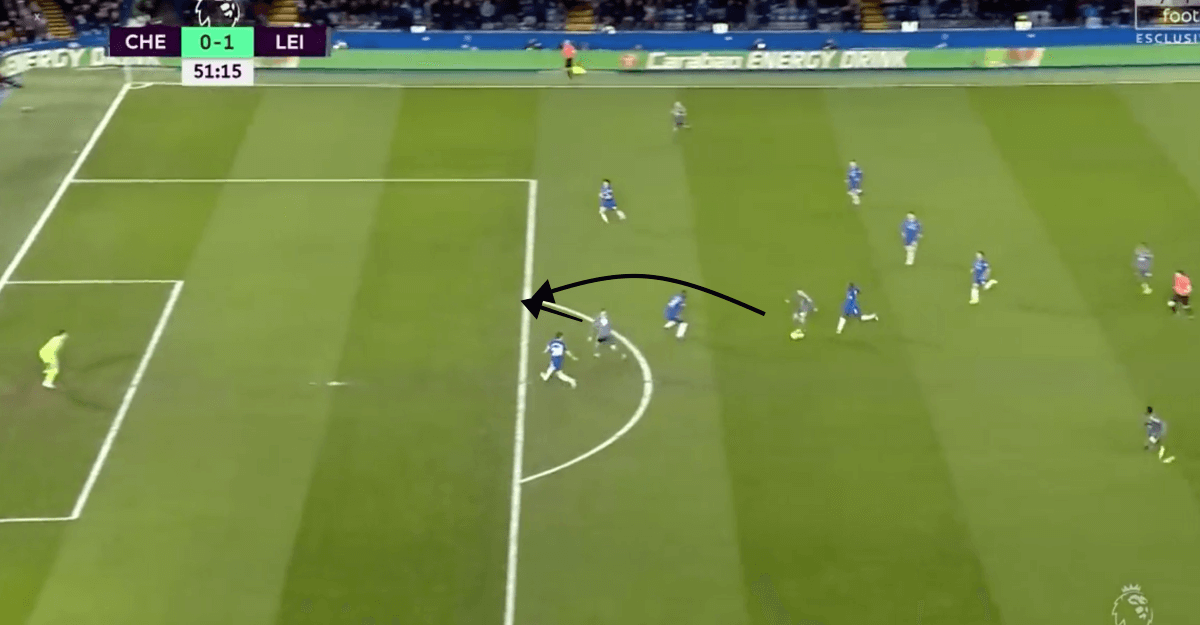 With the goal, Leicester had another advantage, they could concentrate on defence and they got more space for counter-attack since Chelsea had to play more offensive to equalise. Interestingly, Leicester did not sit back immediately. They continued to attack and exercised high counter-pressing which was greatly effective. 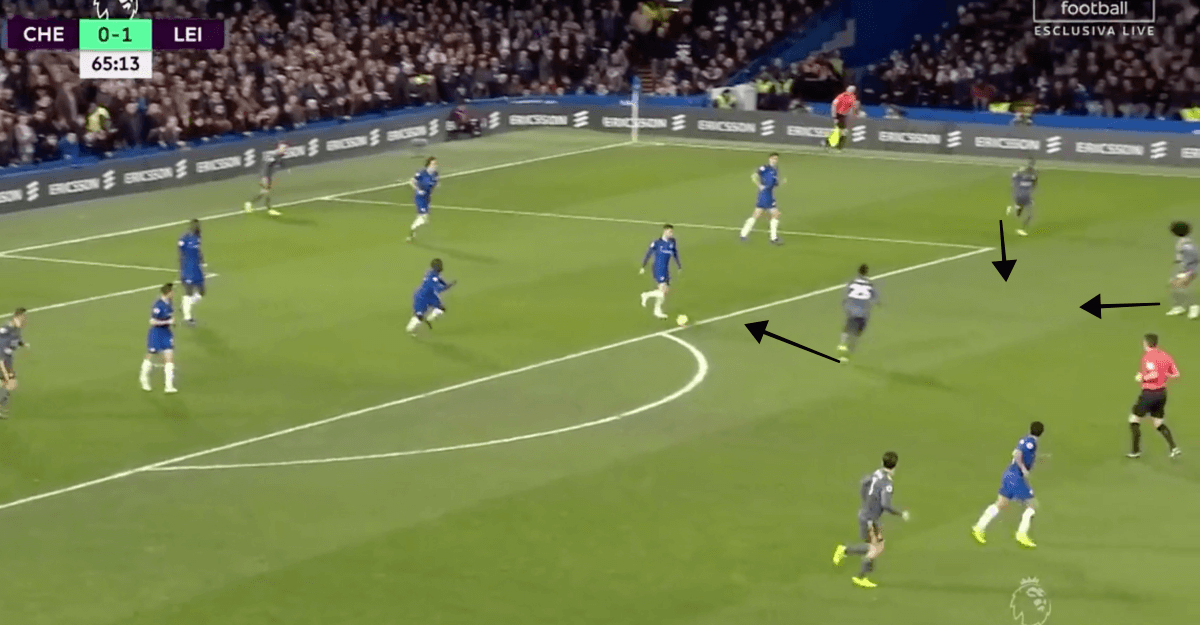 The guests immediately put pressure on the ball carrier and won the ball back. This led to a scoring chance but this time, Vardy missed.

Under Sarri, Chelsea have strengths to build from deep with quick vertical passes but Leicester were able to disrupt this part of Chelsea’s game. Staying high and reducing the space was essential, which allowed Leicester to gain the ball back in Chelsea’s half. 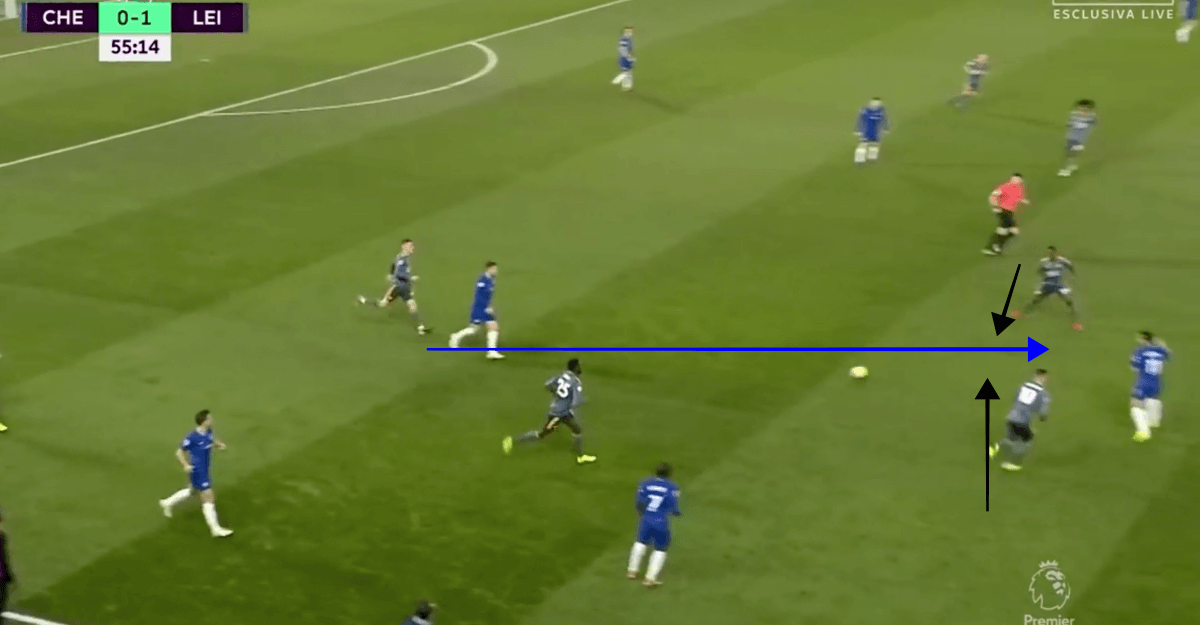 Sarri quickly reacted to the goal and 10 minutes later, he introduced Giroud and Loftus-Cheek to the game instead of Willian and Kovacic. Giroud took Hazard’s position in the centre, while Hazard moved out to the flank. With this change, Chelsea anticipated that Giroud would be better in this massive defensive block and Hazard could bring more quickness to the wing.

However, this did not solve Chelsea’s main issues, whilst Leicester pressing did not allow Chelsea to attack with all in. Thus, this loss indicates that Sarri’s system has weaknesses and still has room to improve. However, there is no time to dive in and repair the problems since the next match will be on Boxing Day.

If you love tactical analysis, then you’ll love the digital magazines from totalfootballanalysis.com – a guaranteed 100+ pages of pure tactical analysis covering topics from the Premier League, Serie A, La Liga, Bundesliga and many, many more. Get your copy of the FIRST of two December issues for just £4.99 here or preorder the SECOND of the December issues with an annual membership right here.

Lampard looking to make a splash in the January window

How does Christian Pulisic compare to Chelsea’s wingers and other targets?

Is Mason Mount the future of Chelsea?

The Data Zone: Draw for Chelsea away to Liverpool