This post initially featured on our comprehensive analysis site, which covers players, matches and more from around the globe – totalfootballanalysis.com

In the last matchday before the international break, there was a prevailing belief that the Manchester United manager Jose Mourinho was living on borrowed time. Playing at Old Trafford his side had gone behind 2-0 to a struggling Newcastle United side and the discontent around the theatre of dreams was palpable. The second half, however, changed that as Manchester United showed the resolve that they were once famous for as they came back to win the match 3-2.

That result bought Mourinho time although there was no let-up for the Portuguese manager as Manchester United were due to play away to Mourinho’s side Chelsea in the first match after this break.

This is after all a Chelsea that appear revitalised by the introduction of the former Napoli coach Maurizio Sarri in the summer. His style of play is the polar opposite of what the Chelsea faithful saw at Stamford Bridge under his compatriot and predecessor Antonio Conte. Indeed Chelsea have quickly adopted the characteristics that we saw from Napoli whilst Sarri was in charge, they dominate possession around the metronomic passing of the Brazilian born Italian international Jorginho but play with an incisiveness that is befitting a team that can boast the Belgian winger Eden Hazard in the final third.

The narrative for this match then was set early. If Manchester United were to continue to build on the momentum of those second 45 minutes against Newcastle then they will have to find a way to neutralise the passing patterns of Chelsea and to stop the dangerous Eden Hazard from dictating the play from his position wide on the left. 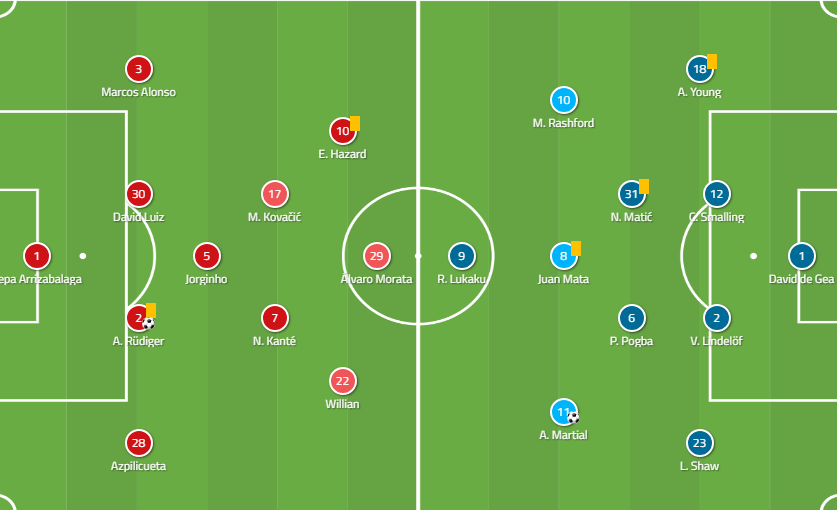 There was little by the way of a surprise in the team news from the home side, the biggest question surrounded the lone striker role with the Spaniard Alvaro Morata being picked ahead of the French striker Oliver Giroud, the latter had played 90 minutes for his country in midweek.

We saw Sarri continue with his midfield triumvirate of Jorginho, Mateo Kovacic and N’Golo Kante with the latter continuing to be used as an ‘8’ moving into more advanced areas.

For the visitors, we saw Ashley Young move across to right-back where he would come head to head against the dangerous Eden Hazard. There was also no place in midfield for Ander Herrera with the Spaniard having just recovered from injury. Instead, we would see Juan Mata playing ahead of two deeper midfielders with Marcus Rashford, Anthony Martial and Romelu Lukaku playing ahead of him.

In the initial stages of the match, we saw Chelsea dominate and dictate the play. There was no surprise given the sheer volume of their passes over the first eight matchdays and for the first half of the match at least it looked very much like the hosts would strangle their opponents through their quick and incisive passing movements.

Manchester United however very much had a plan to combat this although it took time for that plan to become fully effective. Prior to the match, there was a suspicion that we would see the Spaniard Ander Herrera in the starting lineup, we had previously seen Mourinho use Herrera in specific man marking roles to negate the threat of the opponents key player, instead we saw his compatriot Juan Mata play almost as a number 10 from the start of the match.

This move was not purely an attacking one however with Mata assigned a specific marking role as he looked to negate the threat of Jorginho. As Chelsea looked to build their attacking phase through the central third, Mata was never far away from the Italian international looking to limit his touches and ability to knit play together for the hosts. Indeed, United were content to sit in a low to medium block in an attempt to prevent Chelsea from playing through them. 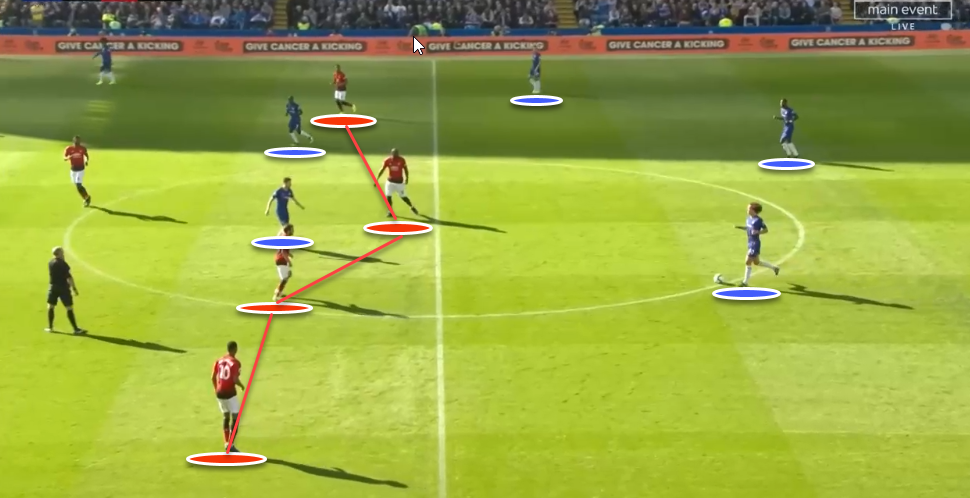 Here we see Chelsea building up from the back. As David Luiz steps out from the back United have retreated to a line of engagement sitting just inside their own half. So far this season Jorginho has been the key player for Chelsea under Sarri, just as he was for the Italian coach at Napoli, this time, however, we see that Lukaku and Mata are closely aligned to the Italian midfielder preventing the easy pass-through from the defenders.

This line of engagement stayed relatively constant for the first half although it was less than successful in the opening stages as both David Luiz and Antonio Rudiger are perfectly capable of passing vertically from their own half and starting attacks on their own.

As the match went on we saw United become more proactive in pressing and looking to deny Chelsea the chance to build up with little pressure on the vertical pass. 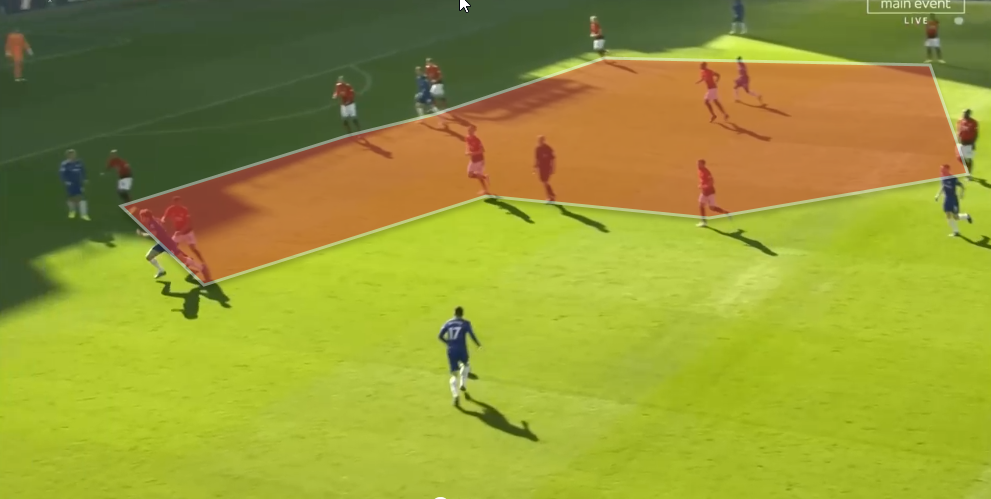 Here we see the deep and compact block that United took up as Chelsea moved forward into the attacking third. The visitors were intent on remaining compact to deny Chelsea the space that they needed to play in between the lines. Even in these positions United were slow to move out to engage the ball in the first instance and trusted themselves to be able to control passing lanes into the dangerous central areas.

What struck me from the initial stages of the match, in particular, was the way that Anthony Martial got back to cover for Luke Shaw at left back. On the right side Marcus Rashford was recovering his position well initially but then he was ineffective defensively as Chelsea passed and moved around him with relative comfort.

In the first half especially there was a sense of expectation around the whole ground that something special would happen. He is very much not limited to the left of the Chelsea attack and he would drift freely into central areas emptying the left side for Marcos Alonso and Mateo Kovacic to move into.

Time and time again Hazard would take possession intent on turning and attacking the penalty area in order to create chances or fashion a chance to shoot at goal. Indeed we got to the stage in the opening half that even the positioning of Hazard was enough to distract the United defence to open spaces for his teammates to attack into. 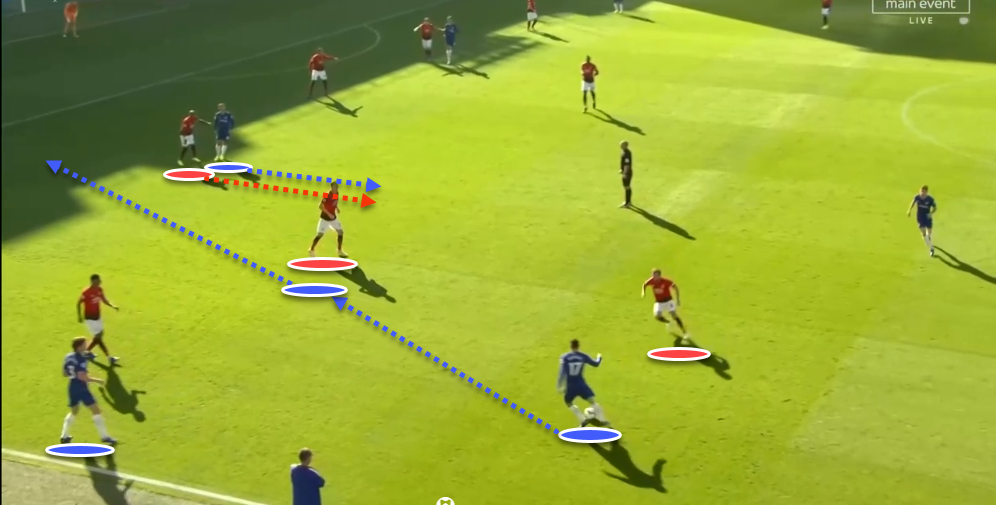 Here we see Mateo Kovacic in possession of the ball on the left-hand side for Chelsea with Alonso having moved up to occupy the wide space on the line. What is interesting however is the positioning and movement of Hazard who is closely marked by the United right-back Ashley Young. Hazard reads the situation and drops deeper into an even more central role, as he does so he forces Young to make a decision, does he leave Hazard to drop off and be free in space or does he track his run. He chooses the latter option and tracks Hazard centrally.

This immediately leaves Nemanja Matic isolated and Kovacic is quick to attack and engage the Serbian central midfielder going past him comfortably and driving into the edge of the penalty area. 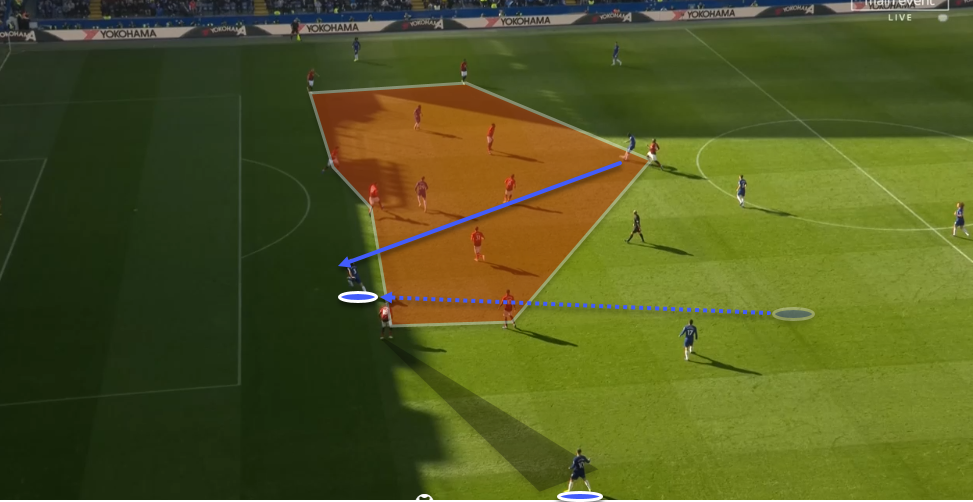 This image shows a moment in which Alonso is almost able to get in behind the United defence for a chance on goal. Initially, there does not seem to be any real danger as Chelsea have the ball in a deep area and United are set in a compact block.

The key in allowing Alonso into the penalty area unchecked, however, is the position of Hazard hard against the near side touchline. Such is his impact on the game even this isolated Ashley Young is still worried about him. He is checking to ensure that his position does not change and Alonso is able to make an inverted run from deep to get on the end of a single and direct vertical pass that breaks the United defensive structure wide open.

In the second half of the match, there was a definite shift as United started to take control and force the hosts back. This coincided with Chelsea becoming far less impressive in their own attacking play, indeed as the match wore on it became more evident that the hosts were struggling to find a way to penetrate the United defensive block.

At the other end, Manchester United were able to find opportunities to stretch Chelsea in transition. 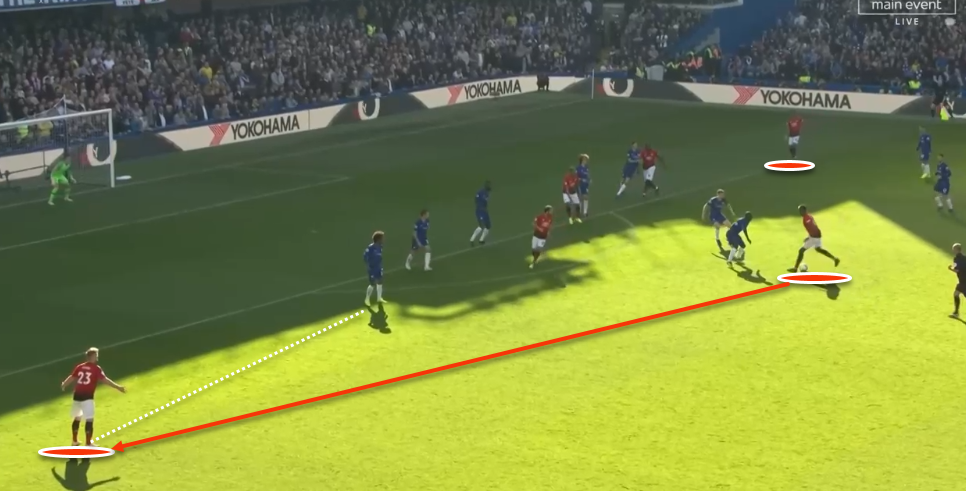 Here we see the lead up to the first goal for United with Chelsea having been forced into a narrow defensive block as they try to deny United the space to play through centrally. Crucially though we can see that United are playing with width in the attacking phase.

On the near side, we can see that Luke Shaw has moved high on the left with William having switched off defensively, as you can see his body shape is all wrong for his position, he needs to open his body in order to have sight of Shaw on the left at all times. In the event, Pogba plays an excellent weight of pass out to the left. 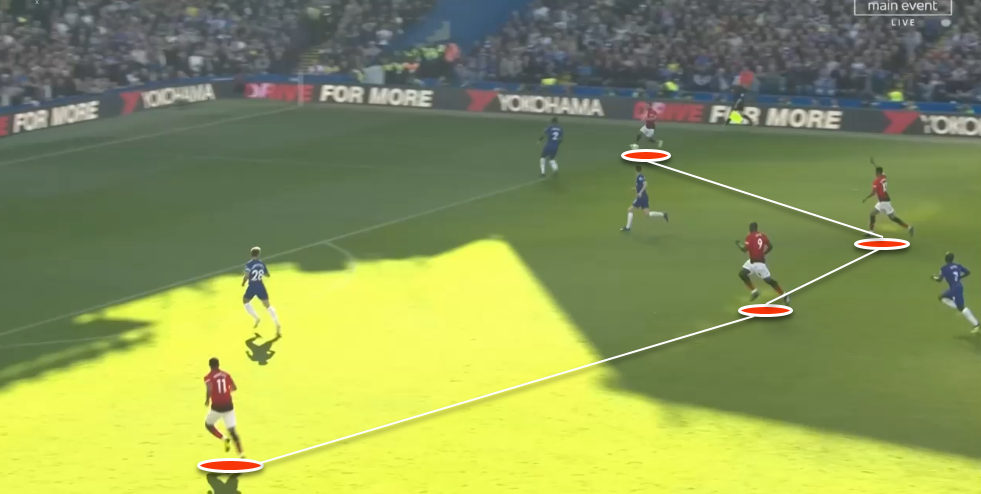 Once again here I have isolated a moment from the game in the lead up to the second Manchester United goal. Having broken through on the right Juan Mata is in a high position, the Chelsea defensive structure is terrible and as Lukaku drives forward centrally he creates space for Marcus Rashford to receive the cutback pass, this leaves Anthony Martial isolated on the near side, the ball is switched and Martial is able to finish the chance.

For all the intriguing ebb and flow of the match, it came down to a chance in the 95th minute with the English international midfielder Ross Barkley finishing after a scramble in the goalmouth to equal the score at 2-2.

In the first half, the match firmly looked to be Chelsea’s to lose. They were impressive and Eden Hazard was on fire, as the second half got underway however it became clear that they were lacking in ideas in the final third. Alvaro Morata played centrally but struggled to get involved with the build-up phase.

Players from Chelsea who will be crucial for their nations at...

How Does Chelsea Target Sergej Milinkovic-Savic Compare To Chelsea’s Other Midfielders?

Chelsea and the big money transfers