This article originally featured on our dedicated analysis site covering football from around the globe, totalfootballanalysis.com.

Chelsea hosted Fulham in the Premier League last weekend. This intense match gives us a perfect material to take a look at this interesting battle. The following analysis will show both sides’ strategy. 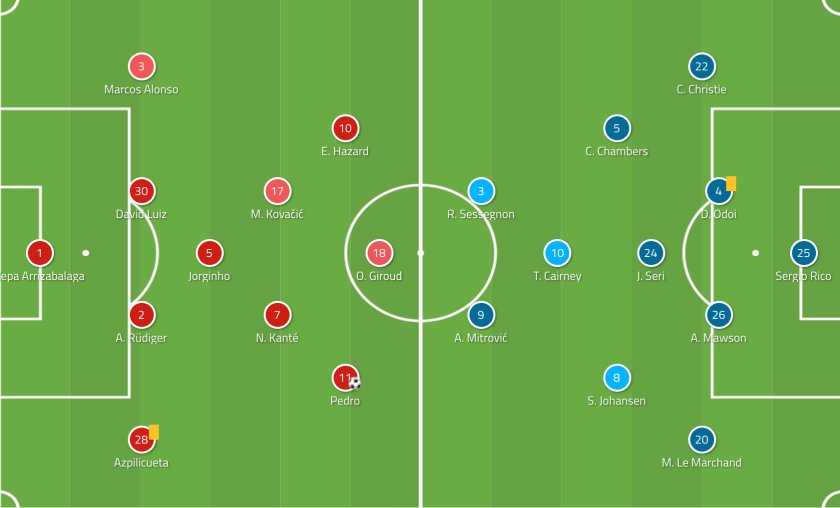 Chelsea played in their usual 4-3-3 system, however, Giroud returned to the starting line-up and Pedro got chance this time instead of Willian. On the other hand, in the absence of Vietto and Schürrle Fulham formed in a narrow 4-3-1-2 shape which will be important later. Sessegnon positioned alongside Mitrovic in the front line. Whilst Cairney featured as a connection between the midfield and forward line. Behind them, Seri took the holding midfielder role and Chambers and Johansen played as a #8s.

As the match started, it has become clear that both teams were aiming to quick progress and attack. This sometimes created situations where quick transitions occurred. One team attempt to turn into counter-attack after stole the ball this led to another lost ball which gave the opponent to counter-attack. By the way, the first goal also scored through a counter-attack. Kante’s tackle initiated the attack, but Pedro put the ball into the net.

Due to Fulham’s centre-oriented formation, they tried to match-up and compete with Chelsea’s midfield trio. Therefore, Ranieiri primary target was executing fairly high press and cut of Chelsea’s progression.

The front line – Mitrovic and Sessegnon – protect the centre then pressing the centre-backs with a diagonal run. Cairney took the responsibility to mark Jorginho, and Johansen and Chambers were pairing with Kante and Kovacic. This often forced the ball wide. When this happened, the ball-sided striker moved out to press the respective fullback.

As the instances show above, not just the striker shifted to the ball-side but also the centre-midfielders. The ball-near #8 followed the opposite #8. Cairney stuck to Jorginho, while Seri moved out to cover the space behind Johansen. Theoretically, this set-up would force the opponent into long balls or give it up. However, this was not the case with Chelsea. Firstly, with Luiz on board, it was easier to escape the pressure. Secondly, the intensity and the big amount of movement appeared in the build-up too. Sometimes Hazard featured as a connection to the further area which also helps them to progress from deep.

Moreover, if Fulham got lazy and did not mark tightly the key players from the home side, Chelsea would able to bypass the press.

And probably the best scenario. Jorginho got the ball during his movement and due to Kovacic launched his movement before Jorginho even received the pass, he was able pass immediately towards Kovacic. 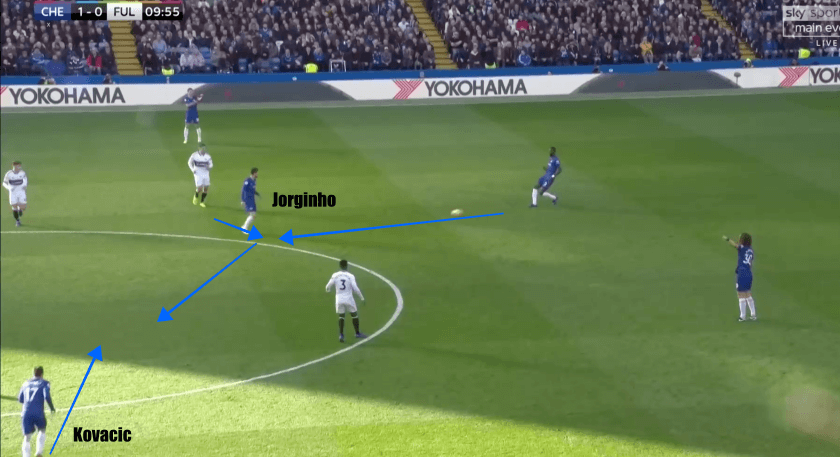 When Chelsea reached the opponent’s half, Fulham tried to close down on them. the adjustment also appeared in the defensive movement. Johansen moved out to press the ball-carrier winger and Seri also occupied a position in the flank in order to mark Kante. 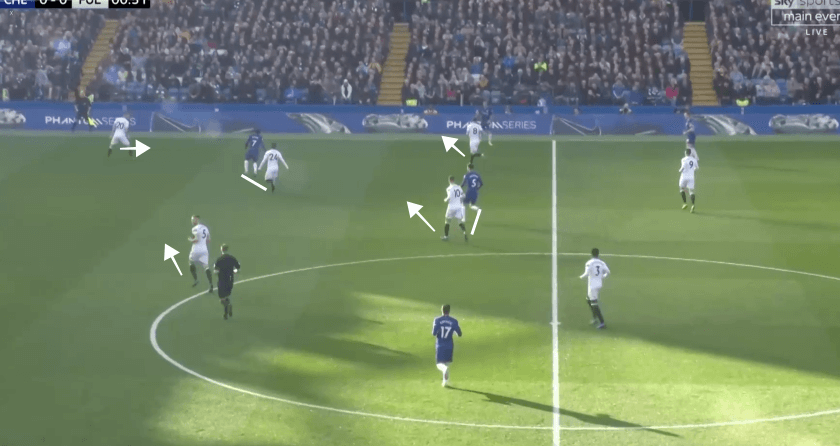 Alonso as a target man

One of the most dangerous patterns that Chelsea used in this match was that passing wide. After overloading an area which attracts Fulham’s defence Chelsea played a through ball to the wing. These mostly targeted Alonso.

Furthermore, as I said earlier, Fulham played in a narrow formation, thus Chelsea was able to target the area next to Fulham’s midfield trio. There were not enough protection in the halfspaces, therefore Chelsea could pass there. These line breaking passes made between Chambers and Sessegnon and also targeted Alonso. 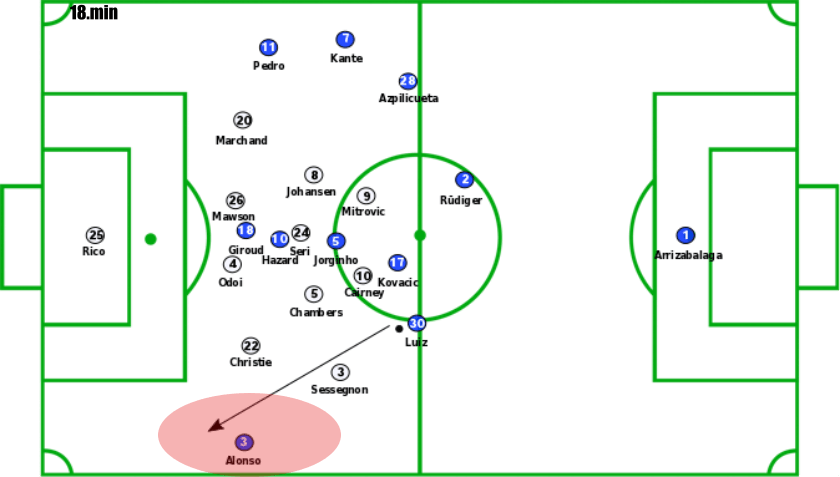 With quick combinations and lots of movements that Chelsea used in their play, they managed to break through Fulham’s defence in the second half too. Forward players often dropped to create a good passing connection with teammates. This attracts Fulham’s man and ball-oriented defence, therefore it constantly drags away Fulham’s defenders. An area often became overloaded where Chelsea could bypass with combinations or quickly played the ball to other areas. Thus the defensive scheme often became unsettled and a little bit chaotic. 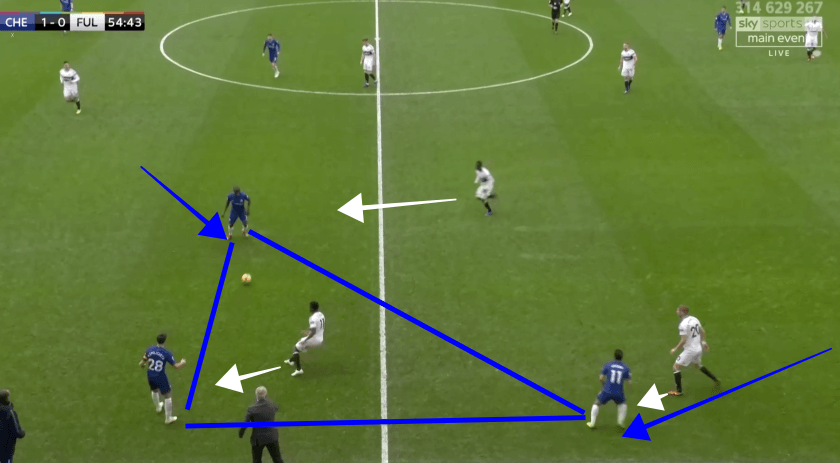 However, Ranieri tried to change things during the break, so Ayite and Kamara were introduced for the second half. This, of course, affected the formation. With the two new wing-oriented players Fulham switched to 4-2-3-1 in the attack. Ayite responsible for the left side and Kamara for the right wing. Seri and Chambers created a double pivot in the centre.

Despite the fact that this system was wider than the previous one Fulham still suffered in the game. Chelsea was able to continue his dominant and dangerous play, they lacked scoring chances. On the other hand, Fulham had a few promising chances. With a better finishing, they could equalise the result.

Fulham was not able to score they had chances though. Whilst Chelsea showed a more cruelty in finishing in scoring chances. Although this was not a big victory rely on the two goals, Chelsea could dominate most parts of the match due to a higher possession rate and quick attacking style. The focus on attacking through lots of movement worked very well. Sarriball seemed a well-organised system which had big potential and a high threat to the opponents, although it still not perfect.

If you love tactical analysis, then you’ll love the new magazine from totalfootballanalysis.com – 118 pages of pure tactical analysis covering topics from the Premier League, Serie A, La Liga, Bundesliga and many, many more. Get your copy today for just £4.99 here!

How Chelsea Were Stopped By West Ham’s Pressing Scheme

Unsung Heroes: These two midfielders slip under the radar at Liverpool...

What Colour Will London Be?