Maurizio Sarri’s Chelsea clinched a top-four finish in the Premier League by beating Watford 3-0 at Stamford Bridge. However, Watford provided a much tougher opponent than the scoreline suggests. Two set-pieces at the beginning of the second half gave Chelsea a comfortable lead which Gonzalo Higuaín added to despite Watford creating plenty of good chances. This tactical analysis will look at what Watford did well to cause Chelsea problems. 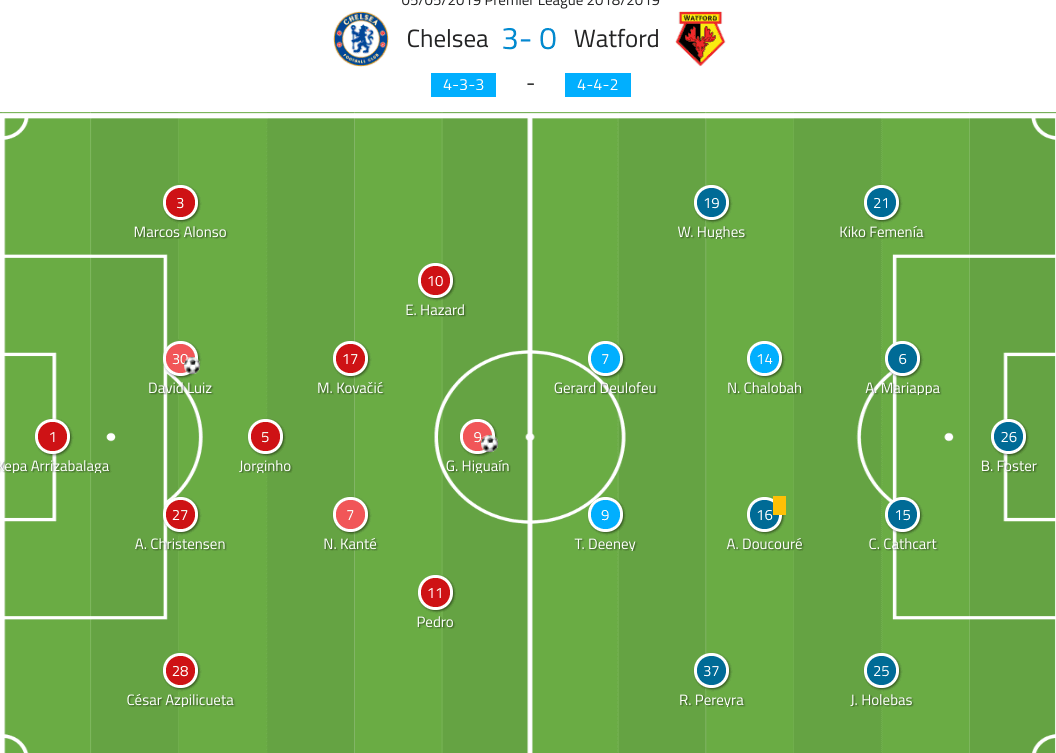 There were no surprises to how either side set up tactically. Chelsea started in a 4-3-3 while Watford used a 4-4-2/4-2-2-2 with their usual personnel, the only exception being Nathaniel Chalobah in midfield alongside Abdoulaye Doucouré. The main selection decision for Chelsea was who to start in midfield alongside N’Golo Kanté and Jorginho. Sarri chose Mateo Kovačić, but Ruben Loftus-Cheek entered the game already after a few minutes when Kanté was forced off due to injury.

One of the key patterns of Watford’s tactics this season has been their narrow wingers. From their 4-4-2 shape when defending, the two wide players, most often Will Hughes and Roberto Pereyra, move inside to largely play in either half-space. In the image below, Pereyra (black) has moved into the half-space with the ball, leaving the wing free for the left-back José Holebas to attack.

If you want to read the whole tactical breakdown of the game, head over to totalfootballanalysis.com or click HERE

How Maurizio Sarri’s Chelsea bounced back vs Huddersfield Town