Maurizio Sarri finally transformed his team’s defensive approach for his team which helped the Blues drag the game over two hours with a clean sheet at Wembley. Putting aside Chelsea’s loss on penalties and the dramatic outburst between Sarri and Kepa before the penalty shootout, the change in approach is worth talking about in the tactical context.

Manchester City saw more of their action in the middle of the park than in the final third, and were left to pass sideways thanks to Chelsea’s redefined midfield shape which provided the needed defensive cover to the backline. The tactical analysis below explains how Sarri brought alterations in his team’s defensive scheme which kept Guardiola’s men worried till the final’s denouement.

Both teams played with their usual 4-3-3 tactical setup. However, the front three of City were positioned widely and more offensively, unlike Sarri’s front three who were positioned deep. Even though both teams used the same formation, the relative positions of their wingers spoke volumes about the intent of one team and its absence in the other. 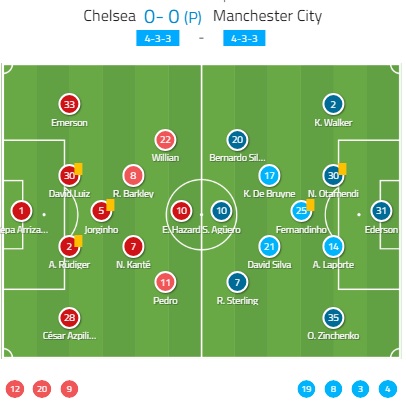 If you love tactical analysis, then you’ll love the digital magazines from totalfootballanalysis.com– a guaranteed 100+ pages of pure tactical analysis covering topics from the Premier League, Serie A, La Liga, Bundesliga and many, many more. Buy your copy of the February issue for just ₤4.99 here, or even better sign up for a ₤50 annual membership (12 monthly issues plus the annual review) right here.

Best trio in the world: Five things to watch out for...

Chelsea set to battle Man City for the signing of Ilaix...