Under the tenure of owner Roman Abramovic Chelsea have presented something of a juxtaposition. There is a definite sense of separation between the clubs prestigious youth academy and the first team squad, despite the significant level of funding being funnelled into the youth system there have been very few players graduate from that youth system to make any kind of impact at first-team level.

That may be about to change over the next year or two with the likes of Ruben Loftus-Cheek and Nathaniel Chalobah having spent successful loan periods with Premier League clubs and younger prospects like Mason Mount drawing rave reviews during a loan spell with Vitesse Arnhem in the Eredivisie.

With that said however it is the 17-year-old wide attacking player Callum Hudson-Odoi who looks set to make a real impact at first team level over the course of the coming season. Chelsea has had a succession of coaches over the last 6 years but all have had one thing in common, a focus on first-team affairs at the cost of playing time and development for youth team players. Now though, with the appointment of the former Napoli coach Maurizio Sarri, that may be about to change. Indeed with Hudson-Odoi performing to a high level in pre-season for Chelsea, we have already seen Sarri come out in the media to confirm that the youngster will remain with the first team squad for the coming season and that he will play a part with the first team. This statement coupled with the assertion from Sarri that he is ‘bored’ of transfers and prefers to work with and improve the players that he already has seems to suggest a definite sense of policy from Chelsea.

The purpose of this article is to examine some of the strong points that make Callum Hudson-Odoi stand out, even as a 17-year-old.

Callum Hudson-Odoi is primarily a left-sided player although he is comfortable working from the wide areas or from the half space. He is tall, standing over 6ft, and exceptionally explosive both in and out of possession but it is footballing intelligence that really stands out when you watch him play. Indeed it is this football intelligence that could well see Hudson-Odoi become an important part of the Chelsea team under Sarri this coming season with the Italian coach preferring a highly technical and quick attacking style of play.

During the recent episode of the Total Football Analysis podcast, myself and Chris Darwen were discussing Chelsea with Chris stating that he believes that Sarri may look to convert Eden Hazard into a central attacker. The presence of Hudson-Odoi in the squad may allow Hazard to move in with the youngster taking some minutes wide on the left.

While at Napoli we saw Sarri use the Italian international Lorenzo Insigne in this wide left slot where he played a more inverted role, Hudson-Odoi presents a different option to Sarri with his ability to move in quick attacking patterns and attack space in behind the opponent’s defensive block.

Here we see an example taken from the pre-season match between Arsenal and Chelsea. Hudson-Odoi played on the left of the attack where he was isolated at times 1v1 against Arsenal’s Spanish international right-back Hector Bellerin.

Bellerin is well known as a player that possesses plus pace although in this match he found the 17-year-old Hudson-Odoi more than capable of not only matching him for pace but of beating him to passes played in behind the Arsenal defensive line.

With the left back in possession of the ball, Huson-Odoi is aware that the first priority is to play a pass in behind the Arsenal defensive line in order to turn the opponents and force them into a difficult defensive action. As such he is already starting to make his run before the ball is played.

Even though Bellerin has a strong defensive position and a head start in this example Hudson-Odoi is still first to the ball not only beating Bellerin for pace but also holding off the Spaniard as they come together when Hudson-Odoi gathered possession of the ball.

Again we see Chelsea in possession in pre-season against Arsenal with the game becoming somewhat cluttered in the centre of the field.

As with the previous example, Hudson-Odoi is aware that the space that can be exploited on the field is in behind the Arsenal defensive line. As the player in possession finds a pocket of space in which to play the ball we see Hudson-Odoi make eye contact, a form of non-verbal communication, before making an intelligent double movement to stay onside and attack the defensive line through the channel between right back and right-sided central defender.

This double movement allows Hudson-Odoi to create space for himself before he accelerates through the gap and gets on to the lofted through ball.

As a wide player in a Maurizio Sarri system, we can expect to see Hudson-Odoi, and the right-sided equivalent, isolated against opposition players in 1v1 circumstances relatively often. The way that Sarri likes to build the attacking phase through central areas draws the opposition players into the centre and creates space wide that can be exploited.

We have already seen that Hudson-Odoi possesses supreme pace out of possession that can break the opponent’s lines but this also translates into his ability to manipulate the ball and beat his direct opponent in tight 1v1 situations. 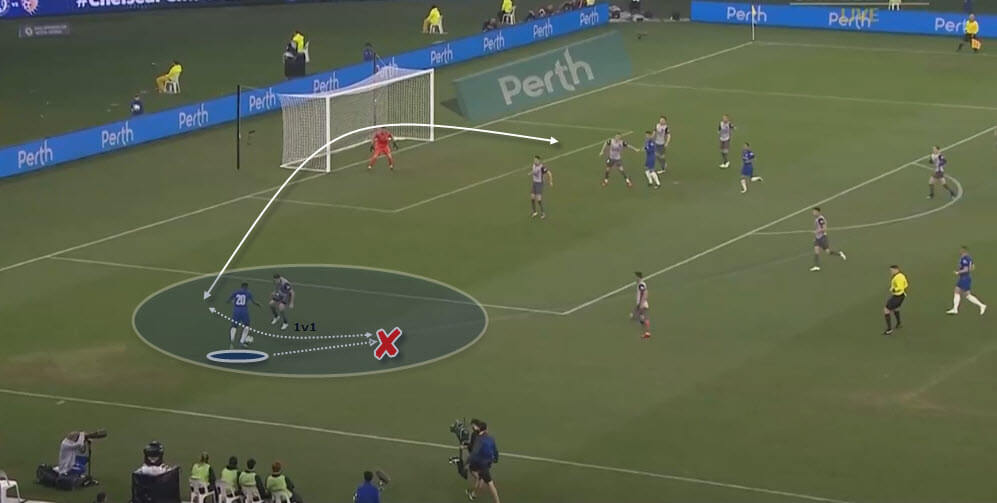 Here we see Hudson-Odoi isolated 1v1 against a direct opponent wide of the opposition penalty area. When a player is as quick and powerful as Hudson-Odoi is it becomes doubly difficult to defend against him as he is able to go left and right against an opponent at any time.

In this specific example, the opponent is already poorly positioned with his body shape too closed off to effectively contain the Chelsea man. As Hudson-Odoi makes his initial movement inside the opponent the fullback is immediately out of balance and as he tries to readjust his balance Hudson-Odoi performs a double movement to drag the ball away from the opponent to the left and attack the line. The end product is also strong with Hudson-Odoi clipping in an accurate cross after he has created space for himself. 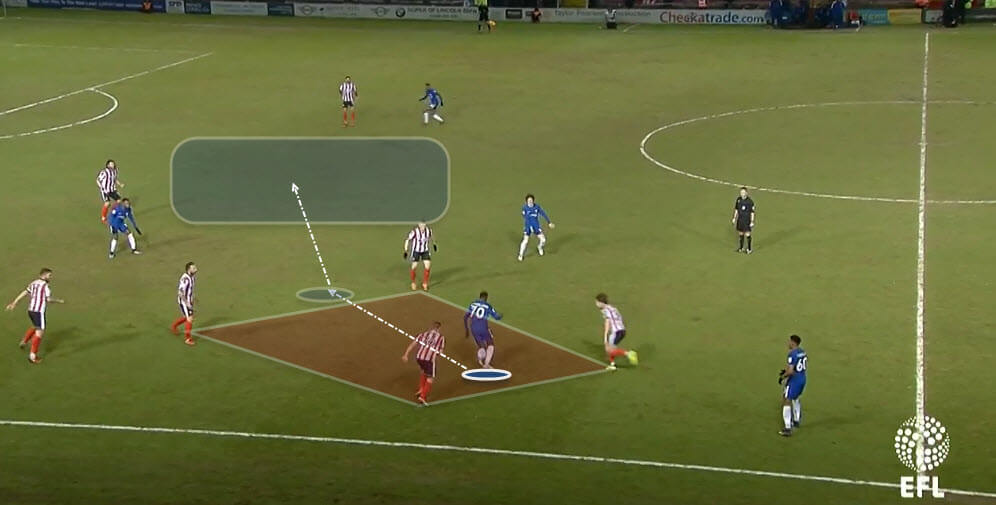 This time as Hudson-Odoi collects possession of the ball on the left-hand side he is surrounded by four opposition players.

Instead of looking to offload the ball immediately to escape the press, however, we instead see Hudson-Odoi quickly read the pitch and identify the space in the final third that could be exploited. He is an exceptionally well-balanced footballer and as he attacks the space in the final third he comfortably beats the players that move in to press and attack the ball. As he gets through the initial pressing trap Hudson-Odoi then explodes through space and quickly attacks the space in front of the opposition penalty area.

We have already seen that Hudson-Odoi possesses extreme pace and the ability to beat his opponent in isolated areas of the field but he also has the vision to play accurate through balls to beat the lines of opposition defensive pressure when the occasion calls for it. Quite often young players with the ability to manipulate the ball in tight areas and the pace to beat opponents comfortably the vision and intelligence to make passes in tight areas can be late to develop. Hudson-Odoi however already possesses the tactical intelligence to combine well with his teammates in and around the final third of the field. 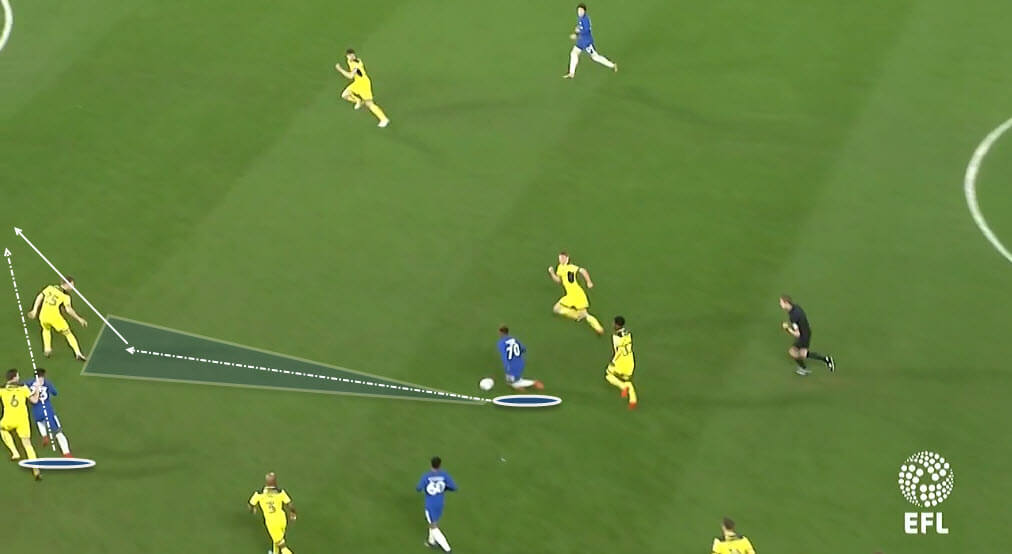 Here we see Hudson-Odoi in possession of the ball in the final third of the field in a central area. The opposition defensive line is poorly constructed as Chelsea are attacking through a quick transition and Hudson-Odoi quickly isolates and attacks the nearest defensive player, by doing this he pins the defensive player in space and as his teammate in the more advanced position makes an intelligent diagonal run and is able to receive the pass from Hudson-Odoi for a clear chance on goal.

This time we see Hudson-Odoi in possession of the ball for England at youth international level. As he collects the ball there are two players closely positioned who make quick vertical runs to force the defensive line back and creates space for Hudson-Odoi to create.

Instead of looking for the easy vertical pass or driving with the ball himself we see Hudson-Odoi read the run of Phil Foden, the Manchester City attacker, on the far side and as his run develops Hudson-Odoi clips a perfectly weighted ball over the defence for Foden to have a chance on goal.

There is no doubt whatsoever that Callum Hudson-Odoi is a supremely talented player. He has the physical and technical attributes that should see the young wide player reach the very top of the game.

It will be interesting to see whether he is able to establish himself in the Chelsea first team this season and whether this will establish a pathway that others are able to follow.

How did Chelsea’s Callum Hudson-Odoi do on his first Premier League...

Is Kepa Arrizabalaga The Right Replacement At Chelsea?