This post was originally featured on our network website which covers players, matches and more involving football – totalfootballanalysis.com.

Chelsea spent a lot of money on Christian Pulisic. They paid €64 million for a 20-year-old player from the US who isn’t even starting for Borussia Dortmund at the moment. The transfer period started with a bang.

The most talented player from the United States will come over to England in the summer. However, both clubs have already agreed on a permanent transfer. Pulisic is going to play for Dortmund for the rest of the season and try to help them win the Bundesliga title.

Some people seem to be sceptical about the transfer. In Germany, many fans argued that Dortmund got the better end of the deal. I don’t want to argue whether the transfer fee is too high or not, but I’m going to show you why Chelsea made a good move in signing Christian Pulisic.

“We are delighted to have signed one of Europe’s most sought-after young players. Christian has shown his quality during a fantastic spell in Germany and at just 20, we believe he has the potential to become an important Chelsea player for many years to come.”

One can tell from her words above that Chelsea sporting director Marina Granovskaia is satisfied with the transfer. With Pulisic Chelsea are definitely getting one of the most talented youngsters in Europe. The American winger perfectly fits into the system of Maurizio Sarri and has the potential to develop into a world-class player. However, is he the type of player who can replace Eden Hazard?

If you love football and always enjoyed watching smaller players competing against taller and more physical players, you are going to love Christian Pulisic. His biggest strength is his dribbling, unsurprisingly for a winger. However, the way he executes his dribbling is different. Tight ball control, agility and quick acceleration are all characteristics which make Pulisic a challenge for every defender.

By having a good first touch, Pulisic is often able to create an advantage. Many defenders try to challenge him, but the American is mobile enough to unbalance them and attack the space behind. The first touch is also crucial for press-resistance. This skill is valuable to play between the lines, where we could see Pulisic play more often. 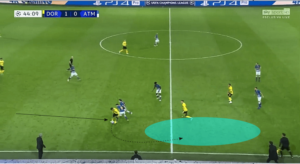 Here, Koke attacks Pulisic before he receives the ball. However, the winger recognizes the open space and quickly turns around. Filipe Luis and Koke are both overplayed, and Dortmund can create a dangerous attack. 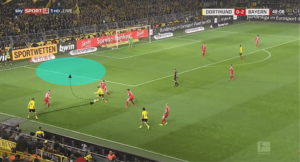 A showcase of his agility was the above scene against Bayern Munich defender Niklas Süle. With his second touch, Christian Pulisic exploits his speed advantage. By turning around his right shoulder and accelerating he catches Süle unbalanced. The winger breaks through and creates another chance for his team.

The special characteristic of Pulisic’s dribbling is his agility. Even with high speed, changing direction and maintaining control of the ball doesn’t seem to be a problem for Pulisic. He changes direction so quickly that his opponents look often more like cones than actual defenders.

But Pulisic is not only a fast dribbler. Chelsea are also buying a quite intelligent winger.  Pulisic understands how to interpret situations. Is dribbling the best option? Where is the weakest point of the defence? How can I help my team?

The dribbling of the American talent creates a lot of chaos in the opposition defence. This automatically opens space for his teammates. Breaking through a compact defence gets easier when Pulisic is drawing three opponents towards him, only to dribble around them and pass the ball into the open space.

Take this image above, for example. Borussia Dortmund are poorly structured and isolated by Augsburg on the wing. However, on the far side, a 3v2 situation for Dortmund appears. Now, you can see Pulisic’s value. Again, he turns around quickly with his first touch and basically dribbles around three Augsburg defenders. In a few seconds, the situation for Dortmund completely changes. With Pulisic’s pass to Kagawa, he single-handily broke down the defence.

What makes him so special is his ability to break down defences. Usually, he starts his dribbling by turning around the first opponent and then accelerating. Sometimes he simply dribbles with speed directly towards the defence. The acceleration and tight ball control help him to react quickly to the decisions the defenders make. Chelsea’s new signing is intelligent enough to realise the open spaces and positioning of his opponents. 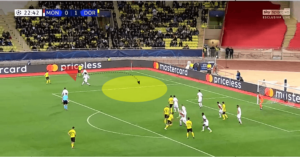 In the situation above, Pulisic is indicating that he dribbles back. When his opponent opens the lane towards the goal, the American quickly turns around and attacks the marked space. This skill is so valuable for teams facing deep defensive blocks. With those abilities, it is not hard to imagine Pulisic in a role for Chelsea moving between the wing and half-space.

Is he only a dribbler?

I praised Christian Pulisic a lot in this piece. However, there are some doubts considering his quality. He is extraordinary at creating chances and his dribbling skills are exceptional. However, how can he help his team further?

Essentially, that is the problem. Christian Pulisic isn’t a great passer yet. He rarely breaks down a defence with a perfect through ball, nor does he move above average without the ball.

“We usually don’t see players scoring this many goals and creating as many assists as he does without being extraordinarily good at bypassing defenders with killer passes, making deep runs to bypass defenders as a receiver or taking up good positions between the lines to bypass players as a receiver. He’s merely at a reasonable level in all of these departments.”

Honigstein argues that Pulisic is a player who can perform at his best in a well-structured environment when the attack is well organised, and his teammates help him. He is unlikely to encounter such problems in Maurizio Sarri’s set-up.

Pulisic isn’t consistent with his passing yet. Too often his attempts aren’t precise enough, or he tries to overplay the defence with weird chip-passes which rarely work. Although he has outstanding technique, timing and decision making aren’t perfect in those situations. Even still, he is showing signs of improvement. 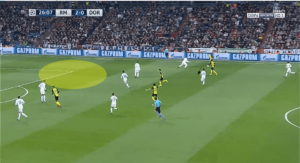 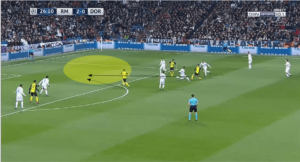 This particular scene from last season’s match in Madrid gives an indication of the potential Pulisic possess. In his usual style, he first dribbled around three players. When Casemiro stepped out to challenge him, the winger recognized the open space and played a well-timed pass to Kagawa.

The opportunities due to his skills

What makes me confident is the fact that Pulisic can create so much through his dribbling. By attracting opponents, holes in the defence appear. Christian Pulisic has to develop to find those as a Chelsea player. 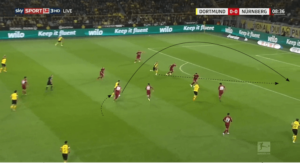 Plays like these where he breaks the midfield with his dribbling and then plays a difficult pass into the open space have to occur more often. If Sarri is able to teach him more patience, Pulisic can develop into a complete threat for defence and not only an outstanding dribbler.

Besides his attacking potential, he brings a skill to Chelsea which could help the Blues. Hard work is something Pulisic learnt from a young age. The winning mentality motivated him as he pointed out in his Player’s Tribune article:

The more I think about it, you know, I’ve really been like that my whole life. Obsessed with winning.

This hard-working attitude translates into good performances without the ball. Pulisic is not one of those players who stops working when the opponent has the ball.

His fit at Chelsea

It is more or less an open secret that Pulisic is the potential replacement of Eden Hazard. Replacing one of the most intelligent attackers in the world is hard. Pulisic fits into Sarri’s system but could co-exist with Hazard as well.

His dribbling can be used in two different ways. Either he starts from the sideline and dribbles with speed towards the defenders, or he receives the ball between the lines and circumnavigates the opposition due to his tight ball control. 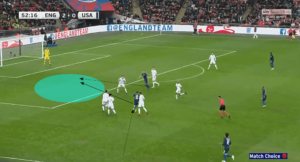 Scenes like those are an example of the usage of Pulisic. He started wide and dribbles diagonally in the centre. Sarri could use him in that role. Alternatively, the American could develop further and becomes the Lorenzo Insigne of Chelsea. That would mean while one winger stays wider, Pulisic would have a more active role.

Chelsea like to overload one side. Pulisic could be involved on that side. Insigne for instance often moved between the sideline and half-space, a role the American winger could occupy as well.

However, Pulisic is not Insigne, so Sarri has to adjust the role to his skill-set. The American prefers the right wing but can also attack down the left side. Together with Hazard, he could be a dangerous attacking force. When both pair up in the half-space, the opposition defence could get in trouble.

Although Christian Pulisic has potential and an interesting skill set, he isn’t good enough yet to replace Eden Hazard. The Belgium winger is a more complete player, probably one of the most intelligent players in the world. Furthermore, Hazard has the physical attributes to overcome defenders. In those areas, Pulisic has to improve.

Christian Pulisic is a fantastic talent with huge potential to improve. With him, Chelsea signed one of the most promising prospects in European football. His skill-set and work ethic fit perfectly to Maurizio Sarri’s playing style. In a well-structured system, Pulisic can perform at his best and will bring in a new dimension to Chelsea’s attack.

If you love tactical analysis, then you’ll love the digital magazines from totalfootballanalysis.com – a guaranteed 100+ pages of pure tactical analysis covering topics from the Premier League, Serie A, La Liga, Bundesliga and many, many more. Get your copy of the FIRST of two December issues for just ₤4.99 here, or the SECOND of the December issues with an annual membership right here.

Recent performances means Christian Pulisic will be given a chance at...

On the Left Side Podcast: New season, new technology but same...