Chelsea F.C’s Ethan Ampadu’s hairstyle and composure on the ball has led many to compare him to his teammate David Luiz. Most adept at centre back but capable of playing in defensive midfield or either full-back positions, his versatility could help him break into the first team squad. After making his first Premier League start for Chelsea last season we are going to explore an in-depth player analysis of the Chelsea wonderkid.

Ethan Ampadu joined Chelsea from Exeter on the 1st July 2017 after making 13 appearances. Chelsea was able to sign him cheaply as he was not under contract. A tribunal ordered Chelsea to pay up to £2.5 million, with only £1.3 million guaranteed, but with a 20% sell on clause.

He made his league debut for Exeter aged 15 years, 10 months and 26 days in August 2016. He also made his Wales debut in November 2017 and has 2 international caps. With Ashley Williams coming into the twilight of his career it would not be a surprise to see Ryan Giggs take a gamble on the young central defender.

At the age of 17, he has now played in the Premier League, F.A Cup and EFL Cup. His future looks bright but his former club Exeter feel hard done by.

The outcome of the tribunal in April 2018 left Exeter Football Club disappointed. Club chairman Julian Tagg said the ruling “sends the wrong message” to clubs looking to produce home-grown players. They believed that the financial rewards for these type of compensation fees should be higher. Early signs suggest that Ethan Ampadu could turn into a Chelsea and England regular but yet the compensation fee provides little rewards to Exeter if he does.

It opens up the argument of top clubs having too much power and influence. Small clubs start to question the value of developing players and if Exeter hadn’t invested in their youth facilities, we may never have seen this exciting prospect.

Since breaking into the Chelsea First Team, Ethan Ampadu has shown his versatility. A breakdown of his positions can be seen below. 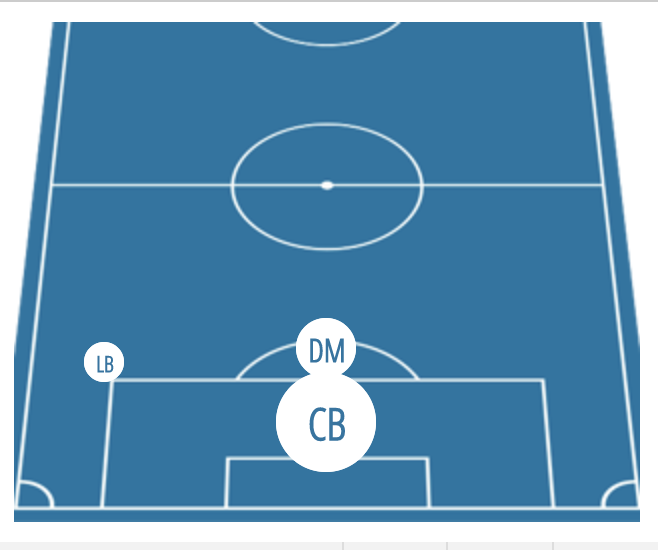 His primary role is as a ball playing centre back. He is comfortable with both feet and provides an option to play out from the back. He can also play in holding midfield and left back. He has drawn comparisons to David Luiz and his passing ability makes it easy for him to transition into midfield. His versatility will be important if he is to break into the Chelsea first team. Should a starting player get injured or suspended he may get a chance in his less favoured positions. 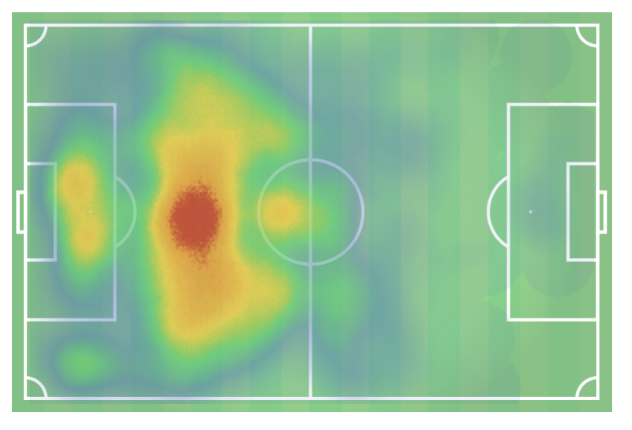 His heat map shows he favours playing centrally and as his career progresses it is likely that opportunities will come either at centre back or central midfield. This versatility will be key to getting a First Team chance, once he gets a chance he needs to cement his place in the team.

To highlight passing ability as a key strength of a primarily central defender shows how English football is developing. Even though he represents Wales at international level, his experience in the English youth system has been heavily impacted by England’s DNA. The new focus is on controlling the game through possession and this style continues in the Premier League.

Whilst he averages 86% pass completion and has a 46% long pass accuracy, he was particularly impressive during pre-season against Perth Glory. He played right centre back and achieved a 99% pass completion ensuring Chelsea were able to control the game through possession. 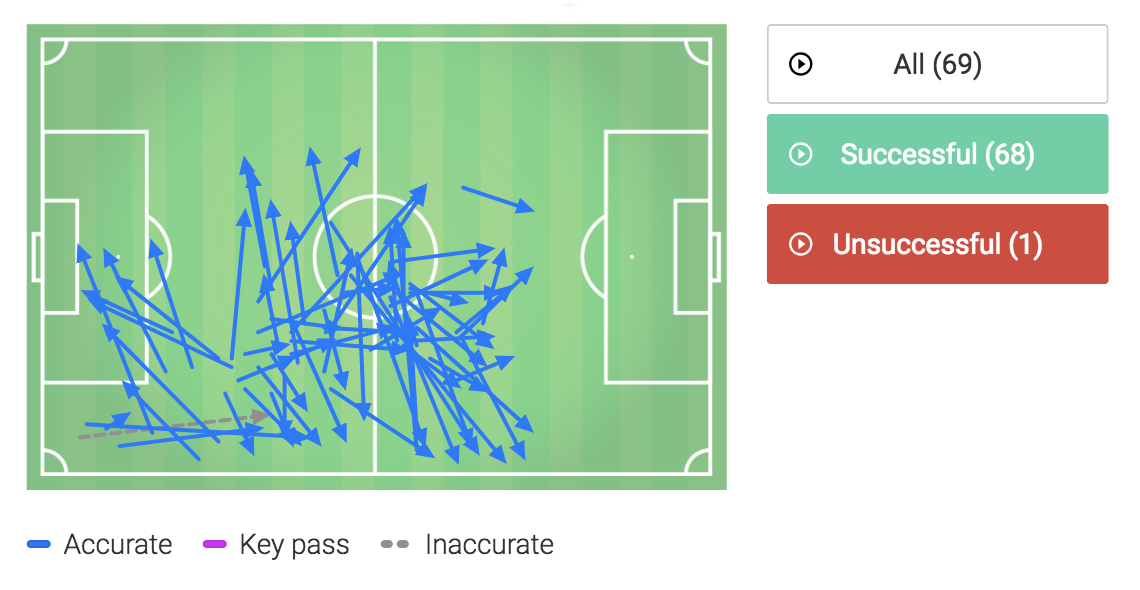 Using his pass map it also highlights the range of passing from Ethan Ampadu. Whilst controlling possession is important, it is also important to break the opposition lines. Playing forward into midfield gives Chelsea another option and also enables them to effectively break down the opposition. It is encouraging that at such a young age Ethan Ampadu has the confidence to be starting attacking moves and penetrating opposition’s midfield lines.

Furthermore, his forward thinking passing ability can be seen against Inter Milan. His passing accuracy was once again very high at 98% and his range of passing gave Chelsea another option building out from the back. 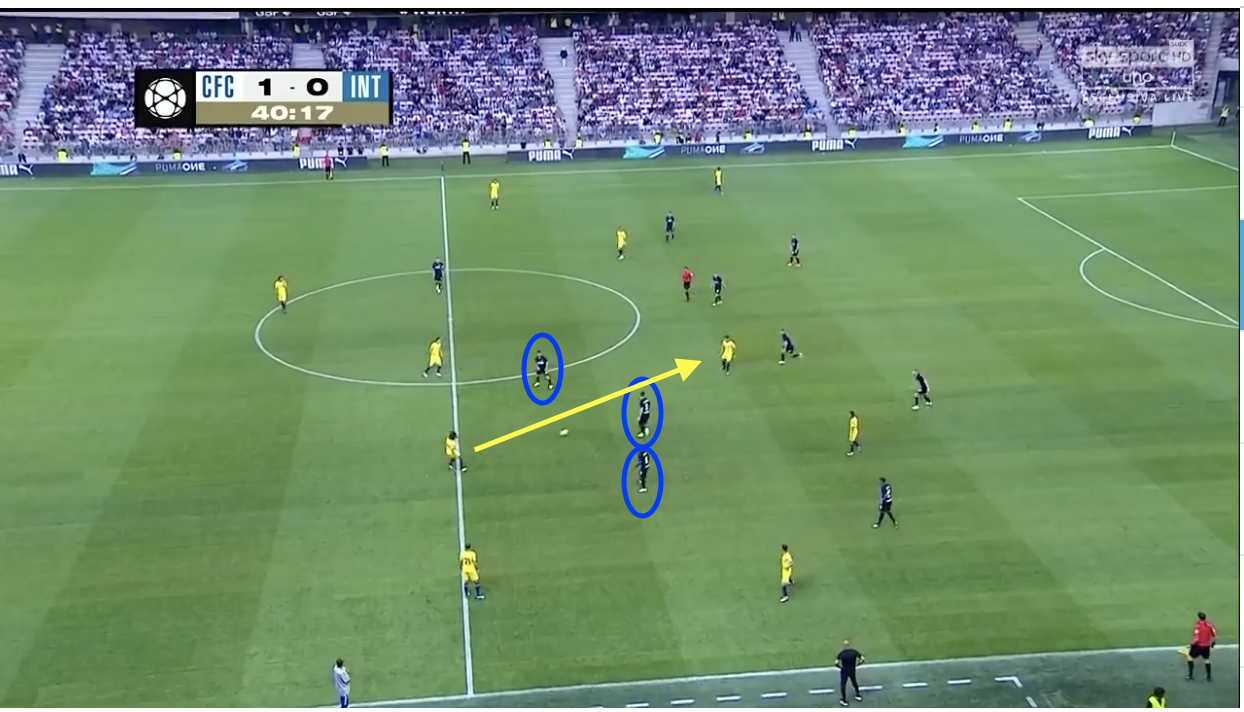 As a ball playing central defender, Ethan Ampadu gives Chelsea the option of being able to break through the midfield line. With his through ball to Alvaro Morata (see above) he has managed to take three opposition players out of the game. This enables Chelsea to attack further up the pitch and play in more dangerous areas. Whilst possession will be important for Sarri at Chelsea, it will also be important that they can transition quickly from defence to attack. As we can see above, this then enables Chelsea’s attacking players to break on the defensive line and open opportunities that the midfield was previously shielding.

Most impressively he makes an average of 7 interceptions per match. If you compare that to Ngolo Kante (6), Cesar Azpilicueta (6) and David Luiz (5) he is already showing his anticipation. At the top level, anticipation becomes a key defensive attribute and he will need to transfer this skill into the Premier League. 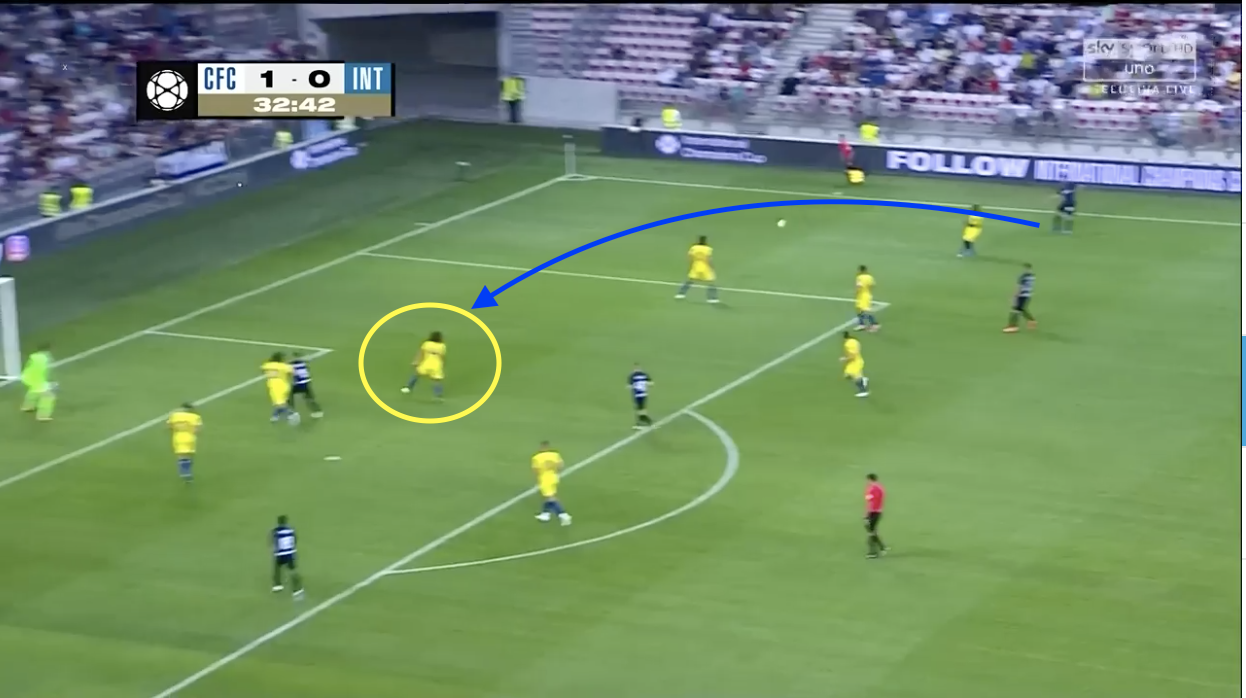 His interceptions were also key against Inter Milan. Above you can see his defensive positioning within Chelsea’s defensive line. He has used his ability to read the game to protect the near post and clear the ball effectively. He is also showing good defensive positioning in a tight line of four to protect the goal, as well as communicating to his holding midfielders to give protection on the edge of the area.

During the Premier League last season, Chelsea showed little attacking ambition and relied on the counter-attack. Under Maurizio Sarri, attacking football will return to Stamford Bridge and Ethan Ampadu’s ball playing skills could provide him with the chance that he has been looking for.

His versatility will be key as it will provide him with more opportunities to play. His brief appearances last season showed his technical capability. As Maurizio Sarri opts for a more attacking style of play this could give him further opportunities.

At the age of 17, he still has time to develop but what will be key is game time. Ruben Loftus-Cheek thrived on a loan spell at Crystal Palace. Andreas Christenson had a breakthrough loan spell out there and forced his way into the First Team squad. Ethan Ampadu needs to play first-team football to develop and other talents have shown that it is the best way into the Chelsea First Team squad.

It’s early days, but how has Higuain fared at Chelsea thus far?

Bournemouth loss highlights how influential this player is to Chelsea

Who is Chelsea legend Branislav Ivanovic?

Statistical outlook: Why did Chelsea’s plan fail against Liverpool?

Chelsea’s midfield conundrum: how have Kante, Kovacic, and Barkley fared?

Chelsea Looking To End This Sarri Saga This Week