Chelsea’s summer has been pretty exciting so far. The coming of the new manager Maurizio Sarri and a few new signings made the expectations higher. Especially one of them. Right after the announcement of the new manager, the club announced the signing of Jorginho from Napoli – one of the most creative midfielders who helped the Serie A side to compete for the title in season 2017/2018.

The 25-year-old landed in Naples in 2013/2014 from Hellas Verona and made a huge difference in the team’s midfield. His next challenge is Chelsea, and as far as we could see during the pre-season he accepted it without hesitation.

Jorginho is a master of the short passes and that’s the way he likes to play. He is very good at the one-touch passes and the way he puts the opponents under pressure makes them react quickly. That often turns out as a defensive mistake (a gap), which gives his teams an opportunity. He has an outstanding vision and always tries to surprise the rivals with some creative and unexpected movement. 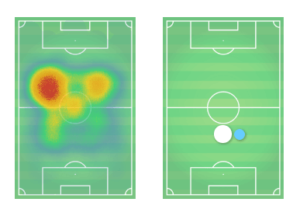 His most common position is right on the centre line, but he often goes to the left wing too. He likes to distribute the ball to his teammates and always creates options for a pass. The player often does interceptions as he wants to get the possession back as quick as possible and pass the ball to the front lines. He is the irreplaceable connection between the back-line and the attacking players.

Passing, passing and once again passing. Under his old-new manager Sarri he got used to one-touch passes and press, which I believe the Italian wants to implement in Londoners’ style of play too. He turned Napoli into a team that plays beautifully, and all hopes are that he is going to transform Chelsea too. Jorginho is the first step of this transformation and he seems to be doing pretty good. He also makes everything easier for his new teammates and gives them time to get used to it. He perfectly connects the back-four with the ones in front of him and makes the quick passing combinations possible. With his great abilities and football intelligence, he always participates in the build-up.

One touch is enough

The Italian international plays in front of the back four (unlike Conte, Sarri is fond to the 4-3-3 formation) and he often faces a high press, but he is unshakable under pressure. He usually knows where his teammates are positioned and that is what helps him to pass with one touch. His level of concentration is high, and one touch is enough for him to make the difference. He leaves the centre field rarely, and it’s only when he wants to go deeper and support the left wing. That way he always keeps an eye on the other side of the pitch and is always ready for a perfect long-range pass or a cross. 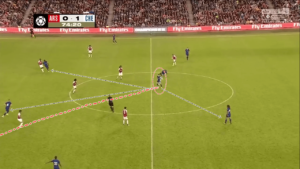 Here he had three options for a pass, but he decided to do a long-range one to the left wing where no one was expecting and his uncovered teammate was able to go up front and create a goal opportunity.

As I mentioned his distinguished understanding of the game often ends up with a key pass to his teammates. He is always aware of the gaps left by the defenders and if there is no gap, he always tries to create it with his movement.

Compared to his new teammates at Chelsea, his passing accuracy is better. Even better of Kante´s one. And we all know how good he is. Jorginho has 89.5% leaving Kante (89.3%), Bakayoko (86.2%) and Fabregas (83.5%) behind. His record of passes per 90 minutes is even more impressive – 108. With the closest one to him being Fabregas with 85,3. The Spaniard has a better record at the key passes. He averaged 3.5 key passes per 90 minutes, with the Brazilian-born Jorginho creating 1.7 chances.

He loves to play through balls and often gets an advantage of a highly positioned defensive line. As it happened in the pre-season game against Arsenal the lack of pressure and organization in the Arsenal’s defence made him see the perfect option in a chip pass to Hudson-Odoi. 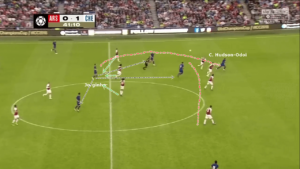 Jorginho is the best choice for Chelsea, as the team is trying to counter-attack and he definitely knows how to push higher and make the transition from the back to the frontlines. In Napoli, the three forwards had a well-trained off the ball movement and they were often waiting for a through pass behind the defence because that way the defenders were focused to put pressure on Jorginho and there was more space for a scoring opportunity. 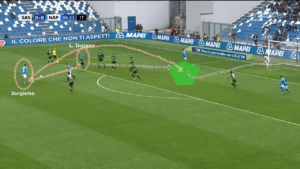 Jorginho receives the ball from Insigne who has a great off the ball movement and goes to the gap left by the defence. Then the midfielder makes a one-touch pass and sends the ball to the free space where Insigne had a great opportunity to shoot and score. His ability to play through the tiniest gaps left and his perfect timing are causing huge trouble. He also likes to do chip long-range passes and in combination with the movement of his teammates, he creates lots of opportunities. 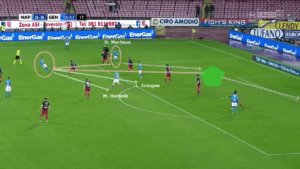 Mertens gives the ball to Jorginho and immediately moves behind the Genoa’s defence. Although the new Chelsea signing has two more options for a pass – Insigne and Hamsik, he has a strong decision making and sees the opportunity in a through ball to the free space where Mertens went to receive the ball.

He’d be a perfect match against teams with deeply positioned defence because he can play long-range passes accurately enough.

At Napoli, Jorginho was the hearth of the team in the 4-3-3 formation that Maurizio Sarri implemented. It’s safe to say that both the coach and the manager were the reason the team managed to compete for the title. Jorginho’s contribution was crucial and the whole team wasn’t performing well when the opponent’s managed to block the 25-year-old.

The Chelsea fans hope that this formation will bring the success back to West London, as the club attempts to challenge for the Premier League title once again, after finishing 5th last season. To be honest, as we could see during the pre-season fixtures The Blues already have a completely different style of play and the players seem to be getting used to the new manager easily.

Typically the Italian football is not a defensive one. Most of the teams have worked on their offensive structure and prefer to counter-attack and press. In the moments of danger for Napoli, Jorginho managed to get himself in a defensive position and with his ability to intercept he was closing the passing lines for the opponents and he was always trying to get back the possession of the ball.

His defensive efforts are not always well-placed, and he finds trouble winning the aerial duels, but that’s only because of his physical strength. Winning aerial duels is not among his best abilities and he often could not win the ball after a tackle. He may get in trouble if the opponents do a man to man marking. Although he is doing pretty good under pressure that happens to be the only way to block his movement.

Jorginho will bring much-needed passing outlet and he is the one who can replace Fabregas properly. He is very talented and the fact that he is only 25 years old shows that he could be the backbone of the team in the future. Counter-attacking in a mere matter of seconds will be the main strength that he is going to bring to Chelsea’s squad.

Three Chelsea stars who failed to justify their price tags in...

Chelsea and issues with 30+ age players

Chelsea’s midfield conundrum: how have Kante, Kovacic, and Barkley fared?