This tactical analysis on how to stop Jorginho first featured on totalfootballanalysis.com

Chelsea’s deep-lying playmaker, Jorginho, is becoming the hit of the season. His unstoppable passing display has led the opponent managers to adapt their tactical plan in a manner to stop Jorginho first. The Italian’s performance against Poland in the UEFA Nationals League A where he struggled under the press had already hinted the managers to keep the midfielder man-marked depriving him of an opportunity to form the passing patterns. Now, West Ham further validated this in the recent Premier League fixture against the Blues where Jorginho couldn’t make the most of his possession under the double press.
Managers have now figured out that to stop Chelsea they should stop Jorginho. And to stop Jorginho, the Italian should remain marked (at least until he learns to keep himself composed and efficient under the press). But is pressing Jorginho enough to stop him? Or the opponents need to integrate the pressing of Jorginho with the other defensive elements of their tactical setup too?

Let’s have a look at some statistics of Jorginho to understand more precisely his impact on the pitch and why stopping him would be the key to stop Chelsea. Jorginho has played an average of 92.7 passes per game with 94 per cent accuracy (a pass in every minute, an accurate pass in every 66th second!) over his only 10 appearances and 925 minutes played so far in the season – including both club and national level appearances. No doubt, the defensive midfielder is acknowledged as the main passing and distribution linchpin for both Chelsea and the Italian national team. His engagement with the players in the passing maps of Chelsea clearly stresses how integral the role and position of Jorginho (#5) is at the base of every passing structure throughout the outfield.
Not just his passing in general, but the pitch distribution of his passes is worth notifying, which shows his accessibility to the far areas of the pitch, as shown in the chart below. His intense on the ball presence in almost every area of the pitch highlights his playmaking acumen and role as an engine from every vertical plane of the pitch and almost every point of the defensive half.
These statistics show despite being a defensive midfielder, how much important Jorginho is to Chelsea’s attack directly and indirectly. Thus, stopping him directly by man-marking may not be enough as he can drag his opponent markers out of the position while he would follow his wider teammates to help on a position-bound passing play. He can even exchange a pass across his teammates with a one-touch during the instant his opponent would just move off him even slightly. Chelsea as a whole has been training for one-touch passes, so Sarri men always have this tactic to counter press the opponents, if nothing else. This way, Jorginho keeps on his on-the-ball actions all over the pitch, which calls for an extensive pressing scheme by the opponents.
In this tactical analysis, we will look at how managers have arranged their press over Jorginho with respect to their overall tactical setup and which of these arrangements went and would be more effective than the others.

The opponents of Chelsea which press high – or trap in a transitional phase where the low block is yet to be formed – are less likely to stop Jorginho effectively just by marking him in a 2 v 1 fashion. Firstly because Chelsea wingers are supposed to step in, sometimes too deep that the two would cross each other. This gives them space and thus also means availability of at least one passing option for Jorginho in between the lines, which he would capitalise with one touch. Secondly if not that, Jorginho would still keep a long through pass as his last playmaking option on his plate – though he uses it very less often, when he does while spared for few seconds, they go mostly accurate. On average, Jorginho is likely to play 3-4 long passes per game with over 85 per cent of accuracy, out of which around 57 per cent are targeted to the opposite half.
Thus, to stop Jorginho not only he should be pressed but also his ‘ultimate’ passing options, the front line players, should be made so otherwise, the Italian would find a way out. This pressing arrangement is difficult to deploy in a high block defence – or an initially low block defence transiting to a high block during some phases of the game – as it wouldn’t be numerically superior enough over Chelsea’s front line to press tightly thus still opening the ‘ultimate’ passing options for Jorginho somewhere in the offensive half of the pitch, which he would take seconds to exploit even if he was under the press.
With his instant distribution, Jorginho finds the front line players frequently even under press thus giving extra space to them.
In the last fixtures played where Chelsea’s opponents were defending in even low or mid-block, there were some transitional moments which stretched their defensive block either vertically or horizontally and thus opened up Chelsea’s ultimate front-line players and even the route for Jorginho. These moments were enough for Chelsea especially with Jorginho who was already engaged in restricted passing plays with his teammates to maintain the possession and offensive pressure. The role of Pedro is also important here who tends to make clever off the ball moves across the two wings while staying as high as possible to avail such opportunities.
The examples shown below explain such situations where either Jorginho or his ultimate passing options are open. If the former is the case, the off-the-ball moves by wingers would open spaces for the fullbacks or for themselves. If the latter is the case, Jorginho would release a quick pass to the open teammates before being closed down by the nearby pressers. Any form of non-coordination in such a press would give Jorginho time and space to pass effectively and instantly. In the Premier League fixture against Arsenal, Chelsea was pressed under a man-marked scheme. Due to this, the movement of Chelsea players including Jorginho outside their positions created enough gap to be exploited by not only Jorginho but also by his ultimate passing options.
Here are the other examples where Jorginho made his way or created the passing patterns the way the pass master likes to do. While Cardiff City is yet to form the low block, Jorginho, unmarked, efficiently composed the passing pattern with Kovacic. 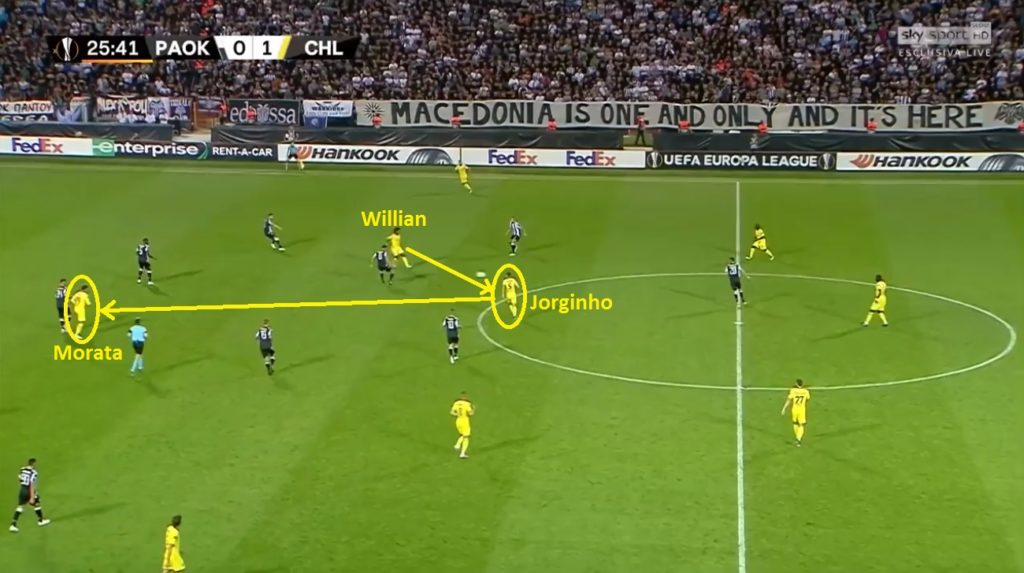 Here Jorginho had an eye on Morata and before he got closed down by the opponent, Willian passed the ball to him which he played to Morata quickly.

In the games, and the situations of the games, where Chelsea’s opponents would form a low block while pressing Jorginho in a 2 v 1 fashion, the Italian is more likely to struggle offensively. This is because his ‘ultimate’ passing options are under the tight press from multiple angles. In such cases, even if he tries a short, deep through pass – or even a long one – before being closed down by the opponent, the attack is very less likely to proceed. However, given that Sarri commands his wingers to cross rotate and the fullback (mostly Alonso) to make runs from behind, Jorginho would find someone open at the width. But with a flat low block defence, this can be catered. While Jorginho’s passing options can find a way with this rotating and run-from-behind tactic even under a low but deep block, a flat low-block would be the solution here.
In the fixture against Portugal, Jorginho was found to struggle under the press because the ultimate, advanced options were also blocked. And while Italy lacked players with tactical off-the-ball acumen other, the situation wouldn’t become any better
In the Premier League fixture against West Ham, Jorginho struggled again the press, again. Since the opponents have blocked and multi pressed Hazard and Giroud (then Morata) too – Jorginho’s ultimate passing options – as part of their flat, low-block defence, such a well-coordinated pressing scheme effectively stopped Jorginho. Almost every time Jorginho got pressed, he passed to Kovacic who, having had to stay lower alongside Jorginho, worked on the distribution instead. Jorginho thus couldn’t work as the base of the key passing structures as much as he is used to doing. Even when the Italian got unmarked, he could only pass it to Hazard or Giroud as they were in his direct line of sight but they were marked as well.
Comparing the passing maps of Chelsea against the different teams, shown above, it can be seen that the connection among the wide players around Jorginho (wingers, wide centre-mids, and fullbacks) at each respective side is weaker in the West Ham fixture as compared to that in the others. This indicates that when the opponents would stop Jorginho to form the base of every passing structure, they can also stop the wider players to form any other passing patterns with each other too. This is because these wider players would only connect strongly with each other when they have Jorginho as the channel among them to dictate the play; without Jorginho these players would be dissociated as they are supposed to be the first or direct passing options for Jorginho rather than the ultimate ones.

It’s been clear that to stop Jorginho he has to be tightly marked in a face-to-face meeting, preferably in 2 v 1. If the Italian is not individually pressed, he could be made free using the third man to distract the pressers. This should be accompanied by marking the advanced players too who would be the ultimate passing options for Jorginho. Any pressing scheme other than that or man-marking of just the direct passing options of Jorginho – Kovacic or backline – while leaving the ultimate ones open wouldn’t be able to stop the pass master in switching the play within a matter of seconds. The following matrix illustrates the importance of both man-marking of Jorginho himself as well as his ultimate passing options in stopping the Italian, with respect to the different tactical structures.

Thus, teams which press high may not ensure the level of intensity of their press of Jorginho. We have Chelsea vs Liverpool today. Klopp is a fan of gegen-pressing and high press. But he would need a constant check on Jorginho regardless of his position – and of course a constant and tight check on his ultimate passing options too. In the league cup clash of the two, Jorginho was not there and Fabregas was the main playmaking icon. But, today Liverpool needs to adapt his tactical structure more carefully.

Should Chelsea boss Sarri should sell Christensen to make room for...

How Lampard and Chelsea are answering the questions

Should Chelsea be kicking themselves after missing out on another key...