This post initially featured on our analysis site for football around the globe, totalfootballanalysis.com

Since Maurizio Sarri has led Chelsea, they’re performing really well. Maintaining their position in the Champions League places in the Premier League and Manchester City – the leader – is still in close range. After 12 matches – eight wins and four draws – Chelsea have a wonderful stat, they’ve scored 27 goals and only conceded eight. Although they have not shown many struggles, there is always room to improve. So in this piece, I am going to take a look at some of the tactical elements that Sarri used in his previous job, at Napoli.

In modern football, gaining space is a difficult task against most teams due to the tight and compact defensive scheme that a lot of teams use.  Especially, when a team is maintaining a low or medium defensive line. Also, sometimes dismarking can be a highly problematic task against man-to-man coverage. However, manipulating the opponent’s defence could be a solution and there are tools that can help during the possession phase like:

Switch to the free man is a simple one, but can be really effective. Most of the time when the defending team are using tight marking around the ball or on the ball-side, they apply for zonal coverage on the far-side. Which means the defending players on the far side move infield to protect the space. (Unless it is a rigid system and the players stay close to the opponent on the far side too.) This led to a situation where the attacking players on the far-side get free. For example, against Juventus – who used man-oriented defence – this happened a lot. Like the instances below: 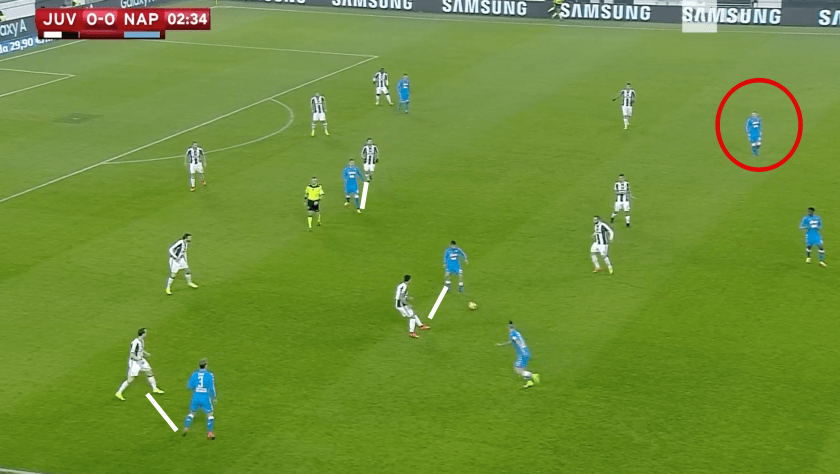 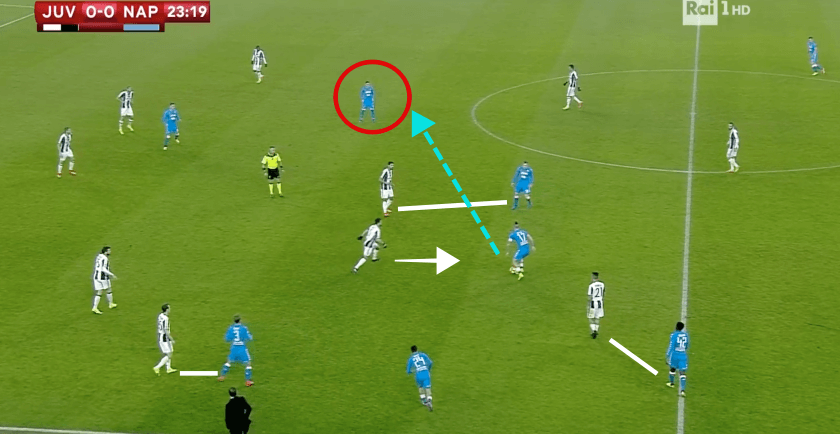 As you see, Napoli players are tightly marked near the ball, but the distance between themselves and the marker become bigger the further from the ball you look due to the defender’s movement. In these situations, Napoli exploit the space on the right side with a quick switch and pass combination.

I have to mention another scheme which is similar to this type, but this time the attacking team focus on opening space for the next line. It occurs when a player moves wider and drags his marker with him. The initial player opens the passing lane to the forward players. However, this is the element which regularly appears in Chelsea’s games. Mostly Hazard or Morata benefit from this.

Vacating a position and filling it

In this scheme, the player makes the space individually by vacating his position and filling it dynamically.

Vacating a position is a common way to make a separation from the marker. The player simply moves out from his base position – into a wider or deeper area – in order to drag his marker away and then dynamically moves back to the vacated position. Of course, the defender has to make a hard choice and consider the space that he leaves behind, and the opponents’ opportunity to use this space to create danger. Usually, the opponent will be encouraged to press intensely,  thus he will follow the attacking player due to the imposing potential pass. But if the defender follows his mark, then the attacking player would utilise the reactive nature of the marking. The advantage that the attackers naturally possess due to the fact that he knows first the following movement. Therefore he can gain an advantage when arriving back to the starting position.

Firstly, I show this in general with the Napoli players. At the beginning, you may see the brackets which show the man-marking players. This a bad setup due to the lack of real option in further up on the field, but Hamsik made that workable. Usually, when a player drops deep and receives a pass, he meets with huge pressure that has to deal with it. However, in this case, Albiol did not pass immediately, he waited the right moment, when Hamsik would become free.

Let’s see this in an instance from a match against Juventus, Hamsik dropping deep with his marker, then heading back quickly thus he was able to receive the pass freely. So, this is how easy it is to manipulate the man-oriented defences and outplay them with this tactical method.

Vertically opposite movement is another variation of dynamic space occupation (when a team find and act in space with speed). However, due to the fact it is a group-tactical element, it needs to be synchronised with the teammates in order to make it effective. During this movement, at least two players need to moving differently at the same time to create space or gaps.

Again, I show this in general and then with evidence from the match against Juventus.

The most important factor in this situation were the teammates who move towards the goal. Due to the fact that defenders are more likely to defend the goa, it allows the opponent to create the separation and dropping without the marker. Also, the timing was key.

As you can see above, while Insigne drops deep, Strinic and Milik move forward and drag the defenders away. Therefore Napoli gained space while Insigne became free, thus he could receive the pass without any pressure.

The alternative of this tactical element is the double movement, which is in spite of vertically opposite movement, an individual tactical tool. In a double movement, the movement is used to increase the space for the attacker to move into a direction then quickly turn into another. For example: an attacking player changing direction and coming short or deep to receive a pass. This a common tool, but much easier than the last two.

Now we saw some tools that Sarri used previously in order to make their attacking game efficient mostly against man-oriented defences, but these can be handy against any defences. These ways to gain space or free men is a really good way to spice up your game and get a wider range of tactical elements. If you do it right, you can boost your effectiveness in attacks.

If Sarri is able to sustain the title challenge and improve the team by adding some tactical tools into the pot he would be highly dangerous for Manchester City’s plans. Nevertheless, Sarri has to deal with his weaker squad, therefore he needs more rotation in order to keep his key players fresh and sharp. Thus, it will limit the potential to add more tactical elements. On the other hand, so far, Chelsea could progress easily in the Europa League. I just hope that Sarri will bring these ideas to Chelsea and we can see these in the future.

Will Chelsea Beat Manchester United at the Weekend?

Who is Chelsea legend Marcel Desailly?

It’s time for Zouma return to London but leave Chelsea –...

Chelsea should avoid triggering the buy-back for the academy player

What Has Maurizio Sarri Changed From Antonio Conte’s Day In Terms Of...

Player Analysis: How Jorginho has improved to help Chelsea’s form